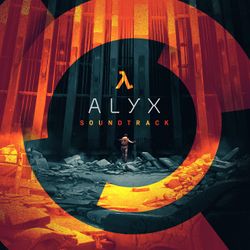 The Half-Life: Alyx Soundtrack was composed by Mike Morasky. A few tracks from the original Half-Life soundtrack by Kelly Bailey were reused. Unlike previous Half-Life titles, the music in Alyx is made up of separate audio files that are dynamically pieced and mixed together in-game, akin to Morasky's previous Portal 2 soundtrack. For the official soundtrack release, the game's music was mixed down to standard individual tracks.

The soundtrack is being released in parts over time going along with the in-game chapters.

The album artwork was created by Valve employee Olly Moss.[1]

This is the first Half-Life soundtrack that isn't composed by Kelly Bailey. In The Final Hours of Half-Life: Alyx it is stated that Mike Morasky "spent months" trying to "imagine what Half-Life would have sounded like" in the time between the release of the original game and Half-Life 2. He listened to "big beat music, drum and bass, electronica, ambient and industrial music" for inspiration, with songs "...like Nine Inch Nails' 'Leaving Hope',The Prodigy's 'Shoot Down' and Skinny Puppy's 'Ghostman'" being seen as evocative of the era. [2]