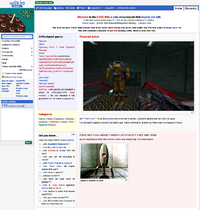 The hacked Main Page, complete with the new skin and logo.

"WTF are you doing the the wiki. i hope its a joke"
― Wrex Man on Hgrunt's talk page

"WHAT THE BLOODY HELL!?!?THIS NEW ADMINS ARE A BUNCH OF KIDS DAMN KIDS WITH BAD GRAMMER NOW THIS WIKIA SUCKS !WHAT THE HELL HAPPEND!?!?!-"
― Blind Thief 54 on the new Main Page's talk page

"Your spelling is terrible, on the verge of being unreadable. Please enlist help with proofreading, or write more carefully. Also, do not lock articles with terrible spelling, it prevents passers-by like me to do quick edits to help out just a little. I'll go away now. Thanks for reading, and good luck with your wiki!"
― Anonymous user to Klow on the fake "Did you know" template's talk page

"Who's the dumbass who changed the site logo to "Cake Wiki"? This new picture had horrible quality and the site is called "Combine Overwiki". It does not fit well (that's what she said). Someone should change it back! NOW!"
― Anonymous user on the new Main Page's talk page

On April 1st, 2010, users Klow and Darkman 4 quickly decided to set up an April Fools' Day hoax at the last moment. While Klow did not have anything else in mind than merely rename the wiki into "Cake Wiki" and give it a new but clean logo, Darkman 4 suggested that the Main Page would be reverted to its very first version (thus very basic, buggy and incomplete), that it would be filled with low-res images and that its contents would be expanded with nonsensical information. He also suggested that the new wiki logo would also get the low-res treatment, a thing Klow was delighted to do. They then filled the Main Page with nonsense, first person sentences, misspelled names and tags, original (and incorrect) research, as well as fake "Featured article" and "Did you know" sections, parodying the (mostly half-dead) Wikia wikis managed by inexperienced users with no wiki formatting knowledge and bad artistic tastes, young gamers in general, and those who cannot spell "Gordon", "Alyx", "Aperture" or "Black Mesa" properly. To complete the mess, Klow also chose a new (blue) skin for the whole wiki.

While many users passing by directly got what was going on, others did not think about having a look at their calendar and posted problem reports, reverted some prank edits, asked sabotagers on their talk pages what they were doing and to stop at once, and sometimes attempted to "fix" said articles, despite their clearly inappropriate name and already having their actual version safe and sound for ages under their proper name.

While Darkman 4 and Klow originally had only the change of the Main Page in mind, the misspelled redlinks gave ideas to other users who started to create several other hoax articles filled with random troll images (most of them even created an account only for that purpose); these unexpected nonsensical articles increased confusion among clueless readers, for the benefit of the original hoax.

When the day drew to a close and the related users felt better after vandalizing a wiki that often takes itself too seriously, everything (unfortunately?) went back to normal, to the pleasure of those with no sense of humor.

What follows are the hoax pages as they were when the day came to an end. The only changes brought to them are the redlinks turned into fake ones to remove them from the wanted pages list, as well as proper categorization. Clearly inappropriate content, if any, has been censored.