"Did you see it? They said it was hauled from the Challenger Deep, but I'm positive that beast never swam in terrestrial waters until a week ago. There's a tranquilizer gun in the shark cage, but I'm not sure it would work on this species. You're welcome to try."
― Black Mesa scientist, to Gordon Freeman[src]

The Ichthyosaur, scientifically referred to as Xenotherus Icthycanthus, is one of the many alien species that have been teleported to Earth from the borderworld Xen. Prominently featured in Half-Life and its expansions, it has a small cameo at the start of Half-Life 2.

In Half-Life: Opposing Force, a wall poster depicts the creature's skeleton with the title "Xenotherus Icthycanthus".

Although it is named after the extinct marine reptile group, the Ichthyosaurs, it resembles them only in its carnivorous ecology and its general size. Perhaps the most characteristic feature of this dark green aquatic creature is its large head with an epoccipital bone, and a mouth with sparsely-grown sharp teeth. An Ichthyosaur has several fins; a long, whip-like tail, used for locomotion; and two arms that end with a single dagger-like claw. In the concept art, the creature is said to use its limbs to pull itself along the murky bottom and to impale and hold prey. When the Ichthyosaur is first encountered in the Half-Life chapter Apprehension, a scientist remarks that while he has been told it was hauled from the Challenger Deep in the Pacific Ocean, he is of the opinion that the creature never swam in terrestrial waters until a week before.

In Half-Life, Ichthyosaurs are encountered in several water bodies, including a flooded laboratory, the reservoir behind a hydroelectric dam, in the sewage areas and in one of Nihilanth's chambers. They are often placid at first, but quickly become hostile, especially should the player take action against them. The speed and viciousness of the Ichthyosaur combined with poor underwater visibility make the underwater areas of Half-Life some of the most frightening parts of the game.

The Ichthyosaur also makes a single appearance in Half-Life 2. During a teleport malfunction ("harmonic reflux"), Gordon Freeman is momentarily transported outside of City 17, in midair, before falling into the ocean. Underwater, he is almost swallowed by an Ichthyosaur before being teleported elsewhere. 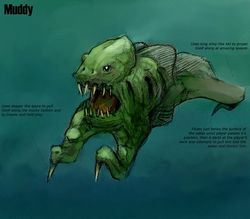 The Ichthyosaur was originally referred to as "Muddy". Strong art direction and clear goals were set for the creature from the start, but the AI proved to be very complicated due to its size and how different it was from the more common game monsters of that time.[1]

The Ichthyosaur was to appear more prominently in Half-Life 2. It can be encountered in the playable Half-Life 2 leak in several coastline maps (such as d2_coast_02, among others), where it takes the role of the Leech, i.e. keeping the player from venturing too far into the ocean. If the player swims out too far from the land, an Ichthyosaur can be heard and a few seconds later the player dies, while the creature cannot be seen. It can also be found in the lake at the start of Ravenholm, in the map e3_town.[3]

In the WC map pack "marc" folder (referring to series' writer Marc Laidlaw) can be found a map named ickypop. Based on an old version of the Ravenholm docks where an Ichthyosaur was to be found, the map consists of a surreal/nonsense sequence: three Zombies are standing on a wooden bridge in the middle of a small pond. An Ichthyosaur jumps from the water and passes above the bridge, killing the Zombies and partially destroying the bridge, and then returning into the water. It jumps out of the water again and begins flying, excreting gibs while floating higher and higher to the end of the map, eventually crashing in an explosion behind a small cliff (the creature also emits its whale-like sound in the process). Above the rocks, right above where the Ichthyosaur has crashed, the G-Man can be seen fixing his tie in a loop while being held in mid-air by a flying crow. Only its tail now visible behind the cliff horizon, the Ichthyosaur starts to emanate an orange gas. The sequence is accompanied by two instrumental tracks, one mysterious (that plays through the all sequence in a loop), another faster-paced (that plays only when the Ichthyosaur first appears), found in the folder "/scripted/stinger/" in the playable Half-Life 2 leak sound files. They were taken from the Aliens soundtrack (dialogues from the film to be used for the maps aliens_test and testroom_ripley can also be found in the sound files). After that everything remains the same in a loop.