"If you're waiting for the tram to Sector G, then you're probably better off walking it. I overheard someone say that all the trams on this end of the facility are having problems."
― Black Mesa scientist[src]

Sector G, referred to as Sector G Hydro Electric,[1] is one of the seven main Sectors[1] of the Black Mesa Research Facility. It is connected to the Red Line of the Black Mesa Transit System.[1] Sector G has at least eight main indoor Levels accessible through the dual Main Access Lifts.[2]

After defeating the Pit Worm, Adrian Shephard goes through a series of partially destroyed hangars located on the other side of the Hydro-Electric Dam. There he and several of his comrades, battle many Black Ops soldiers and Race X creatures squabbling over the area. When he goes through the main hangar area for the first time, it is filled with explosives. The access to the dam is blocked, and he is forced to go underground. There he fights an endless swarm of Pit Drones he must contain by closing two large blast doors with levers and faces a colony of nesting Voltigores in pitch black corridors. When he reaches the surface again, the main hangar area is in ruins, as the explosives have detonated and cleared a path to the dam.[3] 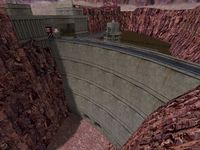 Sector G's most prominent feature is the Topside Hydro Plant, featuring the iconic Hoover Dam-like Hydro-Electric Dam. A road passes above the dam; one direction leads to the Advanced Biological Research Lab,[4] the other to the freight hangars mentioned above.[3]

When Gordon Freeman reaches the dam from the Advanced Biological Research Lab, it is mostly intact, but the HECU posted a cannon on the other side. An Apache is also patrolling the area and destroys the bridge linking the intake tower to the dam. Freeman is forced to quickly dive in the basin where an Ichthyosaur is swimming to reach the intake tower and stop one of the propellers below, then pass under the dam to proceed further, in a desert area.[4]

A duct system inside the dam leads to exit H-287GQ, located in a small desert area. Farther Sector E Materials Transport can be reached through an Ordinance Storage Facility, under which the Gene Worm appears.[3]

The Main Access Lift is a set of two elevators linking Sector G Level 1 to at least Level 4, Level 1 being connected to the Black Mesa Transit System. The one used by Barney Calhoun and two scientists when the Resonance Cascade occurs is seen to connect to Levels 1, 2 and 4 only, the latter consisting of several sublevels accessed from both sides of the elevator shaft. As the name implies, both elevators presumably give access to the entirety of Sector G.[5]

Visited by Calhoun after the elevator failure, this area is connected to the Main Access Lift and located in a sublevel of Level 4. It is filled with crates and boxes, as well as Houndeyes. Beyond it is a large flooded office, then two handling areas.[5]

Dead Vortigaunt in the South Tunnel.

The first of two large handling areas connects Tunnels South and North, each closed by large doors. Access to North Tunnel is denied to Calhoun due to a button failure, he can only access South Tunnel. Beyond the tunnel is another handling area with a set of cranes that Calhoun uses to proceed to the Drainage Canal.[5]

The canal, presumably still part of Level 4 (no Level signs are seen beyond the Small Materials Storage Area) and used for Waste Crushing and Disposal, is accessed by Barney Calhoun through Entry Point B-0. It features a large elevator used to move important items such as crates, and two large wheels in the canal itself used to crush garbage. The Drainage Canal is also connected through a small trapdoor to a small road linking the Freight Yard to the South Exit.[5]