From Combine OverWiki, the original Half-Life wiki and Portal wiki
< List of Earth creatures(Redirected from Chicken)
Jump to: navigation, search

This article lists the Earth creatures appearing in the Portal series.

Birds can be heard outside at the very end of Portal. Some birds such as a goose, a crow or a sparrow can also be seen on GLaDOS' screens at the end of Portal.

As seen on a clipboard found in the Enrichment Center in Portal, Test Subject #042 was apparently a chicken that failed the tests it took.

A rooster is among the 9 animals to be chosen from at the start of the Calibration Course of the Cooperative Testing Initiative. All the other animals are mammals.

Portal 2 concept art revealed during the PotatoFoolsDay ARG shows Aperture Science producing and growing giant chickens, and that one of them escaped at some point in administration areas.

A case of the diorama exhibit sequence cut from Portal 2 was to contain at least one life sized statue of a chicken.[1]

In Aperture Desk Job, utilizing the previously cut concept, a giant chicken is seen wreaking havoc in an office area.

In Portal 2, Wheatley is attacked by a crow after stealing her eggs. The same crow then catches PotatOS and puts her in a nest in Test Shaft 09 after pecking her.

In Peer Review, the crow appears to have laid three eggs in an old GLaDOS prototype chassis. At the end of the DLC, ATLAS and P-body enter the chassis room on GLaDOS' order, and drive off the bird. GLaDOS then orders them to smash the eggs, but changes her mind in time. Instead, she places them in a small Relaxation Vault-like box, where the chicks are raised with GLaDOS as their new mother. One day, while she is mocking them about their beaks, the one she called "Mr. Chubby Beak" smashes the glass of the vault, making GLaDOS realize that they are actually "little killing machines". She then asks them to go to sleep, telling them that she has got a "big day" for them the next day.

In Test Chamber 09 in Portal 2, GLaDOS teases Chell about her weight. Upon completion of the test, GLaDOS ironically compliments her: "Look at you. Sailing through the air majestically. Like an eagle. Piloting a blimp."

In The Lab, the message from the Lab Announcer "Live baby penguin delivery interfered with in Pocket Universe Lab 8." is sometimes played when hitting one of the boxes from the hub's conveyor belt.

In The Lab, one of the doodles of the hub's whiteboard feature a character in a spider costume and spiders surrounding a Bendy.

In Portal 2, many insects can be heard in the ruined Enrichment Center. Additionally, some of them can be also found in the Multiverse.

In a memo by Cave Johnson revealed during the Portal ARG, he states that the "bean counters", a higher authority than himself, told him it was against regulations to practice beekeeping in his office. Johnson ignored this, and his bees' honey won first place in the state finals.

Crickets can be heard outside at the very end of Portal, and are named as such in the captions.

The injection of a praying mantis DNA was the subject of an Experiment made by Aperture Science, eventually leading to creation of Mantis Men. Additionally, mantises are present in 8th and 15th Universe, featured in Perpetual Testing Initiative.

Two depictions of jellyfish can be seen in the maintenance areas of Aperture Science Enrichment Center, both drawn with a pencil on a wall. The Nice Little Jellyfish is located in a small office room overlooking Test Chamber 09 while the Big Bad Jellyfish can be found among abandoned offices, near the first Rocket Turret encountered by Chell.

Some mammals can be seen on GLaDOS' screens at the end of Portal. They include cows, a horse, a black bear cub, a rabbit, goats, sheep, and the skull of a cow.

One animal can be chosen among the nine featured in a table at the start of Portal 2’s Calibration Course of the Cooperative Testing Initiative. The table includes 8 mammals, such as a horse, a deer, an elephant, a wolf, a moose, a baboon, a porcupine, and a rhinoceros. 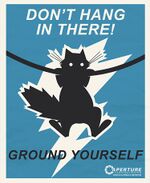 In both Portal 2: Lab Rat and Portal 2, there is a running reference to the Schrödinger's cat experiment.

The hub in The Lab features the poster of a cat hanging from an electric wire made for the Aperture Laboratories Shock Outreach Initiative to remind staff to be wary of electrostatic discharge, with the words "Don't hang in there! Ground yourself".

In The Lab, one of the doodles of the hub's whiteboard feature a Bendy and a washing machine on a camel wearing a crown.

In Portal 2, GLaDOS mentions to Chell and ATLAS and P-body that she sometimes sees deer outside the facility. She then attempts to lure Chell into the "trap" chamber during her escape, telling her a deer can be found there.

A deer is among the 9 animals to be chosen from at the start of Portal 2’s Calibration Course of the Cooperative Testing Initiative.

In Aperture Desk Job, the taxidermy head of a deer is hung on a wall in the opening front desk area. Later on, additional taxidermy deer heads are seen being transported on conveyor belts alongside the Housewares Research Department turrets.

In The Lab, two doodles of the hub's whiteboard feature rabbits.

In Test Shaft 09, Cave Johnson states in one of his pre-recorded messages that the Enrichment Spheres are made out of asbestos to keep out the rats.

In Aperture Desk Job, a rat is seen scurrying on the floor while in the maximum security correctional facility.

The mural with the howling wolf.

A howling wolf can be seen replacing the person on the beach in the mural featured in Chell's room in the Extended Relaxation Center.

A wolf is among the 9 animals to be chosen from at the start of Portal 2’s Calibration Course of the Cooperative Testing Initiative.

Form 21 of the Enrichment Center Test Subject Application Process found on ApertureScience.com contains a list of 1345 items mostly consisting of animals, taken from an index found at the website AnimalPicturesArchives.