"Good morning. You have been in suspension for -FIFTY- days. In compliance with state and federal regulations, all testing candidates in the Aperture Science Extended Relaxation Center must be revived periodically for a mandatory physical and mental wellness exercise."
― Announcer[src]

The Relaxation Center is the first location in the single-player campaign of Portal 2, where Chell is awakened by a distressed Wheatley in the chapter, The Courtesy Call.

Chell's Relaxation Chamber in disrepair when she wakes up several years later. 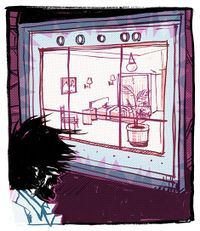 Doug Rattmann looking at Chell sleeping in her Relaxation Chamber.