A testing track, also known as a testing course or a testing area, is a set of modular and mobile chambers built for Test Subjects to carry live-testing of the effectiveness of any products found throughout the Aperture Science Enrichment Center.

Testing courses are the elements and setting for the many gameplay aspects used in Portal and Portal 2.

The results of these tests are either to establish the psychological understanding and comprehensiveness of Test Subjects when given a situation that requires usage of Aperture products, or to further the cause in perfecting these products before they are prepared for any form of approval.

As a result of GLaDOS' sole programming and purpose, she is regulated to manage and continuously develop the courses for the testing of products despite the lack of shipment and approval from the outside world. GLaDOS, even though regulated, truly believes that the studying of these tests will benefit science.

The test chambers from the vintage era, unlike those built and managed by GLaDOS later on in 200-, would begin with volunteer Test Subjects waiting in a lobby and exiting via an elevator to the surface once the testing track was completed (presuming the volunteer test subject does not die during testing). This contrasts with the later testing tracks, in which GLaDOS kills her test subjects in every final chamber of a test track.

Eventually in 1979, Aperture CEO Cave Johnson had faced bankruptcy and decided that the Enrichment Center staff are to take turns in mandatory testing. Sometime after his passing in the late 1980s, Aperture began to expand on even further parts of the Enrichment Center, having built gantry cranes everywhere to support not only the newer batch of test chambers, but maintenance areas and offices as well.

After GLaDOS' takeover on the entire staff, she gains full control and responsibility over the tests and begins conducting them with the aid of Chell, who became her first Test Subject as Doug Rattmann had sabotaged the Test Subject roster. Despite having been killed by Chell later on in Portal, she shows her true dedication to science by still putting Chell to good use in Portal 2. However, she still had a deep hatred for her and began constructing ATLAS and P-body as the new Test Subjects that would render Chell useless in testing. Throughout the cooperative campaign of Portal 2, ATLAS and P-body are her Test Subjects and often her own personal minions.

This unnamed Enrichment Shaft is one of the nine underground shafts reaching approximately 4400 meters up from the deepest parts of the salt mine that is the Enrichment Center, and is featured only in the Portal 2 cooperative testing course, Mobility Gels.

This test course is the final part of GLaDOS' elaborate plot, in which she sends her two robot Test Subjects; ATLAS and P-body through the test shaft to retrieve hundreds of live humans in stasis, stored in a vault outside the tests. 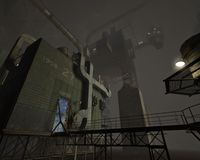 This Enrichment Shaft, codenamed "Zulu Bunsen", is the last in a group of nine Enrichment Shafts reaching approximately 4400 meters up from the deepest parts of the salt mine where the Enrichment Center is built, and featured in the Portal 2 single-player campaign chapters, The Fall and The Reunion.

Throughout Chell's adventure through these test chambers, she is guided by pre-recorded messages of former Aperture CEO Cave Johnson. At some point, she reunites with GLaDOS, who was uploaded into a potato battery and the two are forced to work together to escape the underground shaft. The test shaft serves as the grand revelation on GLaDOS' history. 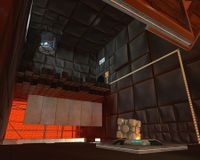 GLaDOS' Testing Track (Portal) is the original testing track featured in Portal, and partially revisited during the course of Portal 2's intro in the single-player campaign. Consisting of 19 test chambers, it was first used by Chell as part of her mandatory testing. The first chamber of this course is located nearby the Extended Relaxation Center from which Test Subjects are deployed from and put into temporary stasis in the Relaxation Vault. The last chamber of this course however, is connected to the Incinerator Room.

GLaDOS' Testing Track (Portal 2) is a set of repaired and newly built chambers in a testing course featured throughout the first half of the single-player campaign in Portal 2. It consists of 22 test chambers, with the starting chamber a recycling of the last test chamber from Portal, where it is connected to the Incinerator Room. The final chamber of this course is the 22nd, however Wheatley has Chell escape the 21st chamber as the last chamber is a death trap for Chell.

Throughout this testing course, GLaDOS slowly repairs these chambers and finally reaches a clean and perfected state near the very end of the course.

Connected to the Hub, these testing tracks are spread across the Enrichment Center and are used for the robot Test Subjects; ATLAS and P-body. Locations such as the Turret Manufacturing and an unnamed Test Shaft are also part of the testing courses, secretly as one of GLaDOS' elaborate plot to further her access over the entire Enrichment Center.

Created by Wheatley when he took control over the Central AI body and the Enrichment Center with it, it supposedly consists of 19 test chambers. These test chambers were constructed if not stolen from GLaDOS after Wheatley had accidentally thrown both her and Chell into Test Shaft 09.

This track greatly reflects on Wheatley's incompetence, featuring the Frankenturrets; which are Weighted Storage Cubes attached to Turrets.

Aperture's testing tracks are the spiritual successors of the Hazard Courses from Black Mesa's Training Facility, first introduced in Half-Life.