"Thanks to the Aperture Science Handheld Portal Device, the impossible is easy."
—GLaDOS[src]

The Aperture Science Handheld Portal Device, originally marketed in the 1950s as an Aperture Science Portable Quantum Tunneling Device, also commonly known as a Portal Gun or by its acronym, "ASHPD", is an experimental tool used to create two portals through which objects can pass.

Used in the Enrichment Center's testing tracks, it is a Test Subject's primary tool to complete each test.

Chell facing a portal she just created in Test Chamber 04.

The ASHPD is a hand-held device which has the ability to manufacture two linked portals. No matter the distance between them, any object which passes through one portal will emerge from the other and vice versa instantaneously. The portals can be placed on almost any surface which is flat and large enough to accommodate them. Certain types of surfaces will prevent the formation of a portal. Material Emancipation Grills will block any attempt to shoot portals through them, as well as reset any active portals should the ASHPD pass through it.

The ASHPD is held with a hand behind the weapon, holding the handle/trigger, while the other hand supports the barrel. A sprite in the small hole on the top of the ASHPD and a sprite in its glass tube have the color of the last shot portal. It has two triggers, one for each of its two portals.

When the ASHPD is fired, a burst of colored energy is emitted from the barrel, corresponding to the colored portal it is intended to create. Upon striking the targeted surface, a portal is formed, surrounded by a colored ring. If the surface cannot accommodate a portal for whatever reason, the shot will dissipate in a shower of colored particles. If one portal is shot into its opposite, the portal will be formed next to the first one, assuming the surface has enough room for it to form; otherwise, it will dissipate as normal. The device can only create two portals at a time. If a third is fired, the other of its type will be automatically closed and a new link will be formed.

The ASHPD also has a zero-point energy field manipulator, similar to the Gravity Gun but far weaker. It can pick up objects, but only those directly in front of it. If the space between the object and the ASHPD is interrupted by a solid object, there is a chance that the object will be dropped, which can sometimes occur when travelling through portals at high velocity and the object accidentally hits the edge of the portal or another object in the surrounding area. It also cannot punt them as the Gravity Gun can, so the only way to throw the object is to physically swing the ASHPD itself, which can at best send the object a few meters away. It cannot catch Aperture Science High Energy Pellets, the equivalent of Combine Energy Balls, due to the weaker manipulator. Items picked up with the ASHPD's manipulator can be carried though portals, which proves to be very useful in several test chambers. Fetchbot uses the same technology for picking up objects.[2]

During Portal, Chell first acquires the ASHPD in Test Chamber 02; it fires only blue portals. It is later upgraded in Test Chamber 11 to fire the orange portals as well (while another model is found there, it actually consists of an upgrade to the current model, as said by GLaDOS). When each of the two versions of the gun are found, they are seen placed on a pedestal in the middle of a Test Chamber. The pedestal is constantly turning on itself, and the ASHPD shoots a portal each time it faces one of the four walls of the room it is in. Chell has to use the non-player controlled gun to complete the Test Chambers and once done acquires the initial ASHPD and later its upgrade. Currently it is not known how the two single ASHPDs are combined into one to result in a "modified" single gun.

In Portal 2, Chell again finds only a single-portal ASHPD near the start of the game. It appears to have been hidden in a Ratman den in the ruined Test Chamber 02 by Doug Rattmann. After GLaDOS is awakened, she loses this one. It falls on the floor in GLaDOS's chamber and is presumably retrieved by GLaDOS. GLaDOS drops her into the furnace, where a fully-functional ASHPD is waiting. Chell loses her ASHPD in the final conflict against Wheatley. When she creates a portal on the moon, the ASHPD is one of the first things sucked through. ATLAS and P-body are provided with fully-functional ASHPDs at the start of their testing.

Chell going through her own portals. The blue is on the ceiling, the orange on the floor. When properly placed, Chell can infinitely fall downwards through the portals.

The ASHPD cannot create portals on every surface. It will not work on certain tiled floors, metal, any kind of prop, doors or windows. It will detach security cameras, making them fall on the ground if they are stationed on a compatible surface and fired upon, much to the ire of GLaDOS. When shooting a portal on an unauthorized surface, the weapon's ray will bounce off and be turned into blue or orange particles that shortly disappear. This constraint was added to make puzzles deeper than merely teleporting to the exit. The surfaces a portal can be created on are the white tiles found in many areas or surfaces covered in Conversion Gel, which is made of ground up Moon rocks.[3] Portals can also be formed on the moon itself. With the noted exception of cameras, a portal is incapable of causing physical damage to either humans or objects. If a portal is closed while something is between it and the destination, the object will automatically be pushed out of one or the other, depending on which one the object is closer to. There are a few instances where the player can use portals to kill themselves, but this is likely an unintentional oversight.

The oval-shaped crosshair/reticle of the ASHPD indicates useful information pertaining to the portals. It first starts with a completely blue crosshair, as the first acquired ASHPD can only shoot blue portals. Later, when the ASHPD is upgraded to shoot orange portals, the crosshair is cut in two parts, blue and orange. In Portal, a smaller oval appears next to the side that has been most recently fired, and when the ASHPD is held in front of a surface where portals cannot be shot, only the outlines of the two oval elements are seen. A filled-in outline indicates a suitable surface. In Portal 2 the smaller oval does not exist, and the two oval elements fill when a portal has been fired.

Shooting an orange portal on an existing blue portal (or vice versa) will create the portal right next to it, if the room available allows it.

An Aperture Science Material Emancipation Grill will "reboot" any portal created by the ASHPD. In this way, the Test Subject starts each new Test Chamber with a "clean" portal network, and must use their assets properly to complete the chamber. They also appear within several chambers, forcing the Test Subject to find a way to work around them to complete an otherwise simple task.

The various Test Chambers require the use of several portal creating techniques, where the ASHPD and momentum play a pivotal part:

The first known version of the ASHPD, left view. 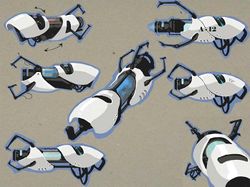 Concept art for the final version.