Sometime before 1943, Aperture Science's predecessor, Aperture Fixtures is founded by Cave Johnson, as a shower curtain manufacturer. The name "Aperture Fixtures", seemingly random, is chosen "to make the curtains appear more hygienic".[7] In 1956, the Eisenhower administration signs a contract with Aperture to manufacture shower curtains to all branches of the US Military, except the Navy.[7] From 1957 to 1973, the company produces mostly shower curtains,[7][14] eventually making Cave Johnson a billionaire. Early work on the Aperture Science Handheld Portal Device began at this point as well; the early version, called the Aperture Science Portable Quantum Tunneling Device, proved to be too bulky for effective use, while poor surface conductors for the portals often caused mangling or death of the test subjects when they tried to use the portals.[source?] Repulsion Gel was first developed around this time as well for use as a diet aid. At first only the brightest and best of society was chosen for testing, but after being connected to a string of astronaut disappearances, Aperture Science focuses on recruiting homeless people for testing instead starting in 1976. (Propulsion Gel was released around this time too.) As far as 1973, Aperture also uses a bulletin board system.[5]

In 1974, Cave Johnson is exposed to mercury while secretly developing a dangerous mercury-injected rubber sheeting from which he plans to manufacture seven deadly shower curtains to be given as gifts to each member of the House Naval Appropriations committee,[7][14] likely because the decision of the Navy not getting its shower curtains from Aperture depended on that committee, and Johnson probably held a grudge against them for that. In 1976, both of Cave Johnson's kidneys fail. Brain damaged, dying, and incapable of realizing time is not now flowing backwards (thus realizing his time will come soon), he lays out a three tiered research and development program. The results, he says, will "guarantee the continued success of Aperture Science far into the fast-approaching distant past."[7][14] What happens to Cave Johnson afterwards is unknown, although it is surmised he dies. It was later retconned that his cause of death was not from mercury, but from Conversion Gel, made out of ground-up Moon rocks, mentioning in Portal 2 that Conversion Gel is a lethal poison that has left him deathly ill. The three tiers of this research and development program are:[7] 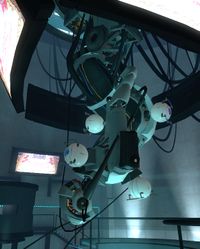 In 1981, Aperture engineers complete the Heimlich Counter-Maneuver and Take-A-Wish Foundation initiatives. The company announces products related to the research in a televised ceremony. These products become immediately wildly unpopular. After a string of very public choking and despondent sick child disasters, senior company officials are summoned before a Senate investigative committee. During these proceedings, an engineer mentions that some progress has been made on Tier 3, the "man-sized ad hoc quantum tunnel through physical space, with possible applications as a shower curtain." The committee is quickly permanently recessed, and Aperture is granted an open-ended contract to secretly continue research on the 'Portal' and Heimlich Counter-Maneuver projects.[7] From 1981 to 1985, work progresses on the 'Portal' project. During this time, several high ranking Fatah personnel choke to death on lamb chunks despite the intervention of their bodyguards,[7] showing that the US government has apparently put the Heimlich Counter-Maneuver to work.

In 1986, word reaches Aperture Science management that Black Mesa is working on a similar portal technology. In response to this news, Aperture Science begins developing GLaDOS.[7] It is unknown why and how her name was already in use as far as in 1973. In 1985, the Aperture Image Format is maintained by Doug Rattmann.[5] In 1989, testing on parallel universes is performed in Pocket Universe Lab 08.[11] In 1996, after a decade spent bringing the Disk Operating System parts of GLaDOS to a state of more or less basic functionality, work begins on the Genetic Lifeform component.[7] During that time, the Aperture Science Red Phone plan is implemented in case GLaDOS appears to become sentient and godlike, requiring an employee to sit by a red phone on a desk in GLaDOS chamber's entrance hall.[15] In 1997, GLaDOS' version is 3.11.[5]

In 1998, Aperture Science releases the Propulsion Gel to the public as a diet aid, serving as a dietetic pudding substitute made out of liquefied, slightly less non-toxic fiberglass insulation (i.e. slightly more toxic) and marketed under the name "Propulsion Pudding". However it is a failure and must be pulled from shelves. Later that year a new formula, the Repulsion Gel, is released, and is another failure. Both Gels are subsequently recycled for use with the ASHPD in Test Chambers instead. The same year, Aperture releases other testing elements, such as the Excursion Funnel, a tractor beam-like funnel made of liquid asbestos, the Thermal Discouragement Beam, a laser to be used with a Discouragement Redirection Cube to destroy Sentry Guns and activate some buttons, the Aerial Faith Plate, a catapult plate flinging into the air Test Subjects or any other object upon contact, and the Pneumatic Diversity Vent, a variant of the Vital Apparatus Vent used for distributing objects to Test Chambers.[16][17]

In May 200-, the untested AI of GLaDOS is activated for the first time as one of the planned activities on Aperture's first annual bring-your-daughter-to-work day. Upon being activated, she almost instantly becomes self-aware, takes control of the facility, locks everyone inside, floods the Enrichment Center with a deadly neurotoxin, but is partially halted when she is quickly fitted with a Morality Core. She then begins a permanent cycle of testing, aimed at beating Black Mesa in the race to develop a functioning portal technology.[7][14] However a few days later, on May 16, the Black Mesa Incident occurs at the Black Mesa Research Facility, allowing aliens to teleport from Xen to Earth, eventually leading to the Combine invasion, stopping GLaDOS' race against Black Mesa.[14] 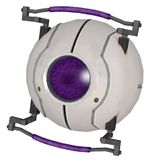 As seen in the hacker message found on ApertureScience.com referring to the lockdown, the remaining employees continue working, as they are said to be working on twenty year old equipment. The construction of an Enrichment Center is also mentioned, suggesting that the Aperture Laboratories house several of them. The number of Aperture Science employees also likely diminishes, until there are only a few of them left. The Aperture Science Handheld Portal Device is likely already completed at that time, but it is unknown if it is before or after GLaDOS' activation.

During that period, Portal Storms continue to rage on Earth and spread chaos, eventually leading to the Seven Hour War, resulting in Earth being defeated and subsequently controlled by the Combine. Later, around 20 years after GLaDOS' activation, Gordon Freeman is awakened from his stasis by the G-Man, and arrives in City 17, which greatly disturbs the Combine's grasp on Earth.

A typical Test Chamber in the Enrichment Center.

Some time after GLaDOS' takeover of Aperture Laboratories and shortly after the Combine invasion of Earth,[18] the Enrichment Center seems to be long abandoned, and GLaDOS seems to rule it alone, although other people are apparently still trapped somewhere.[15] The scribblings left by Rattmann also seem rather old, showing that the Enrichment Center has been partially abandoned for some time. A calendar named "The girls of Aperture Science", dated 1983, is also rather worn-out. Chell is awakened in her Relaxation Vault in the Enrichment Center, and is guided as a Test Subject by GLaDOS, utilizing the completed ASHPD, while the A.I. shows signs of instability. When GLaDOS attempts to murder Chell at the end of her tests, she flees through maintenance areas of the Enrichment Center, and eventually seemingly destroys GLaDOS, before being dragged away inside by the Party Escort Bot.

Before her partial destruction, GLaDOS hints to Chell that things have changed since the last time she left the building, and that what is going on out there will make her wish she were back in here. GLaDOS also says she was the only thing standing between them [GLaDOS and Chell] and an undetermined group, most likely the Combine.

Portal 2 is set in the far future after Portal, roughly 50,000 years.[19] During that time, Aperture Science is left in massive disarray after GLaDOS had been deactivated, although other parts of the facility remain powered and functional such as the Personality Cores and Chell's Relaxation Vault.

The Borealis as seen in Episode Two.

"Pillar one: Science without results is just witchcraft.


Pillar two: Get results or you're fired.
Pillar three: if you suspect a coworker of bein' a witch, report them immediately. I cannot stress that enough. Witchcraft will not be tolerated."

a. Hoboes and Tramps
Lives spent wandering aimlessly, cowering before authority, and drinking concussive amounts of home-distilled potato alcohol make hoboes the perfect Human Enrichment test subjects. The hobo questions nothing, will follow orders if fed, and, like all hoboes, has a restless, wandering heart. (Note: The wandering heart of the hobo should not be confused with Drifting Heart Syndrome, which several transients contracted during testing.)

b. Child Orphans and Foundlings
Deep-rooted abandonment issues leave most orphans highly susceptible to shame-based psychology (for a complete list of opportune moments to obliterate the esteem of test subjects, please consult Training Video #89-D, "You'd Perform This Test Better if You Had Parents"). Recent advances in the use of scorn, flattery used in an ironic context and naked contempt as motivational tools have yielded similarly profitable results.

c. Psychiatric Patients
Past experience shows these fellows are simply not shy at all about carrying on, disrupting tests and defecating just about anywhere that pleases them. Frankly, it is off-putting, and small wonder why Aperture-brand mental institutions are being phased out in favor of more orphanages.

d. Seniors
Frail, brittle hands make holding science devices difficult. Most were born before the advent of science, and can become confused and disoriented when asked to participate in relatively simple tests (teleportation, invisibility, adjusting esteem levels of orphan children)." 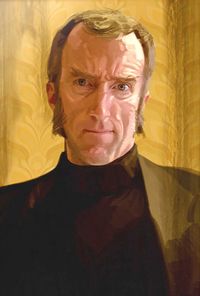 As with Black Mesa, the Aperture Science logo is directly based on the company's name, appearing as a stylized, partially closed diaphragm, with an aperture in the center. An "aperture" is an adjustable opening in an optical instrument, such as a camera or telescope, that controls the amount of light passing through a lens or onto a mirror. An "aperture" can also simply refer to any opening.[24][25] However the name "Aperture Science" is likely random, as it was merely chosen for its shower curtains to appear "more hygienic".[7] Dog's unique eye is also an aperture in a diaphragm; the Emergency Intelligence Incinerator is also topped by a diaphragm. Furthermore, real-life logos such as the Picasa or the Jyske Bank logos bear similarities with the Aperture Science logo. 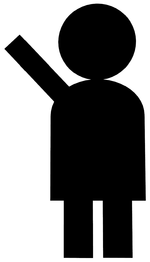