Concerned: The Half-Life and Death of Gordon Frohman

Concerned: The Half-Life and Death of Gordon Frohman (or simply Concerned) is a webcomic created by Christopher C. Livingston[1] that parodies the first-person shooter Half-Life 2. The tool that was primarily used to create Concerned was Garry's Mod,[1] a sandbox modification which allows the player to physically manipulate models and props from Source games the player has installed. The first issue was released on May 1, 2005.[2] After a year, the comic ended on November 6, 2006 with a total of 206 issues, including issue 0 and the acknowledgments.[3] 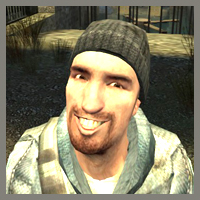 Concerned follows the same general path through the story established by Half-Life 2, but instead follows the adventures of Gordon Frohman, a hapless, lethally clumsy oaf who arrives in City 17 a few weeks before Gordon Freeman. Frohman is incredibly naïve and, unlike the other citizens, seems to enjoy living under the rule of the totalitarian administrator, Dr. Wallace Breen, and the Combine. He holds an insane reverence for the latter, even going to the point of having a plush doll of a Combine Soldier. In the comic, Gordon Frohman is shown to have caused many of the events in Half-Life 2, either directly or indirectly. For example, the letter written by a 'concerned citizen' regarding the reproductive suppression field in Half-Life 2, is shown in the comic to have been written by Gordon Frohman.[4]

The early phases of the comic show Frohman excitedly arriving at City 17, eventually taking a job at the Citadel, under a Combine Elite named Mr. Henderson. As most of his human colleagues become Combine soldiers, he realizes that Henderson has no immediate intention to do the same for him, citing his incompetence. Demanding to become one with the Combine, Frohman willingly sets off to Nova Prospekt for invasive surgery to join the Overwatch. Meanwhile, he selects Ravenholm as a residence where he can commute to and from City 17, but lacks proper transport with which to get there. After a failed attempt to reach Ravenholm using Dr. Kleiner's teleport, he is stuck in a Counter-Strike: Source server for a week. Frohman, in frustration, seeks Ravenholm by foot instead. Traveling through City 17's canals, Frohman finally arrives, badly injured and dazed, at Black Mesa East. At first, he is welcomed as a helper, but his stay there is eventually cut short because of the trouble he has caused at the base - a fine example being the irritating overuse of the gravity gun. He is fooled into leaving the base, and finally reaches Ravenholm.

On Frohman's arrival, Ravenholm is depicted as a peaceful, bright and cheerful place devoid of any Combine elements. After adjusting, Frohman becomes accustomed to the town, but unintentionally discloses the town's location to Dr. Breen, who immediately orders his forces to "bomb the shit out of them" - killing many and turning many more into zombies. Frohman himself is attacked by a headcrab and is turned into a zombie, yet retains his free will. After a while, his headcrab dies of malnutrition, due to his lack of intelligence. Later, he finds a medkit which cures his zombie infection. With Father Grigori's help, Frohman escapes Ravenholm and presses on toward Nova Prospekt. After surviving several more hazards, Frohman reaches the Coast and obtains a rusty bicycle from another resistance base. En route, he stumbles across St. Olga, the setting of Half-Life 2: Lost Coast, and another Counter-Strike: Source server. After passing the final resistance base on the coast and an Antlion-infested beach, Frohman encounters an Antlion Guard, which is killed by a Vortigaunt from a nearby camp. This allows Frohman to retrieve bugbait.

Frohman, accompanied by several bugbait-controlled Antlions, eventually reaches Nova Prospekt, only to be turned away as he does not have an appointment. He gives up and returns to City 17 in the following strip as Gordon Freeman finally arrives in the city, linking the comic's time frame with the start of Half-Life 2. Frohman is drafted into the resistance by Barney Calhoun after failing to disrupt their operations, and unintentionally signals the start of the resistance's uprising by accidentally killing a Metrocop using one of his Antlions. During the fighting, he accompanies Freeman himself and mingles with resistance members, aids the Combine in the capture of Alyx Vance, and reunites with Norman Frohman - his long-lost assassin twin brother, only to promptly witness Norman's death at the hands (or foot as the case may be) of a Strider.

Following this, Frohman returns to the Citadel, unwillingly aiding Freeman in his journey up the Citadel and influencing the plot of the game. After Freeman is captured and brought to Dr. Breen. Freed and pursuing Dr. Breen to the Dark Fusion Reactor, Frohman attempts to kill Freeman, arming himself with a crossbow. He spends too long trying to come up with a one-liner, however, and and the reactor explodes before he can fire the shot. Frohman is flung off the Citadel peak by the explosion. Dr. Breen also survives, having fallen from the Citadel onto a pile of dead Combine soldiers. However, Frohman falls right onto Breen — killing the latter — but is seriously injured himself. Baffled by his ability to survive, Frohman realizes through a flashback that he has been under "Buddha Mode", a cheat code which prevents his health points from dropping below one, throughout the comic's duration. Frohman inadvertently turns the cheat off, and even spoils an opportunity to be rescued by a group of purple Vortigaunts. In the end, Frohman dies unceremoniously, with a group survivors of the City 17 uprising observing his body temporarily, before heading to the train station for Episode One.

Livingston stated that the comic was a good way of pointing out several shortcomings of video games, and first-person shooters in particular, exemplifying the presence of various objects throughout the levels of games, indented to aid the player, but which would have little chance of being found in the real world in a similar matter.

“There's a lot of elements about video games to poke fun of, especially in first-person shooters, which all have a lot of things in common, such as health kits, ammo, and barrels filled with explosive material strewn about levels for no practical, real-world reason. It just seemed like a good setting to make jokes.”
— Christopher C. Livingston[5]

Much of the comic's dark humor is derived from its contrasts with Half-Life 2: in a depressing, dark vision of a conquered humanity's future, in which Gordon Freeman becomes a hero and a savior.

The comic contains many references to events and objects in the game. In one comic, Frohman makes a clerical error that causes the Combine to order far too many explosive barrels, thus suggesting an explanation for the barrels' ubiquity throughout City 17 and beyond.[6] In another, he writes a letter to Dr. Breen asking why using his flashlight reduces his ability to run, a reference to Half-Life 2's flashlight and sprint functions using the same power source.[7]

Along with that, it is revealed that, while an employee of the Black Mesa Research Facility, he had contributed to the resonance cascade that allows for alien forces to invade in Half-Life by accidentally delivering a wedge of cheese to the test chamber where the cascade occurs, giving the explanation that the borderworld is apparently "very lactose intolerant". Half-Life: Decay, however, indicates that Dr. Gina Cross is responsible for this task. Livingston admitted he did not play Decay, thus having not been aware of its storyline. He also stated that the comic takes place in the PC version of the Half-life 2 continuity, and since Half-Life: Decay was never published for the PC, it does not affect the comic.[8]

The comic has received positive reception from both the public and editors of various gaming magazines. Joystiq claimed the comic "stands out from most other gamics [comics consisting of game screenshots] by virtue of the quality of its writing and presentation".

Editors of various gaming magazines have also given positive reviews to Livingston's webcomic. Computer Gaming World described the comic as being "funny", PC Zone also said of Concerned as being a "mildly amusing HL2 comic". The comic had also caught the attention of reviewers outside the United States and the United Kingdom, the Romanian Level magazine saying the comic is "a recommendation to every fan of the game and anyone looking for a good daily laugh".

Marc Laidlaw, the lead writer for Half-Life, is a fan of the comic, calling it 'truly funny.'[9]

As stated by Livingston in several interviews, his relation with Valve Corporation was a good one, the company being pleased to have a comic based on their game.[10] According to Livingston, Valve also intended on collaborating with him to produce printed copies of Concerned. However, this was never finalized as the resolution of the comics was too low for printing.[11]