The Half-Life High Definition Pack, also simply known as the HD Pack, is a content pack consisting of new and upgraded material for games in the Half-Life series. It was created by Gearbox Software and originally included with the PC release of Half-Life: Blue Shift. It includes content for the original Half-Life, Opposing Force, and Blue Shift. 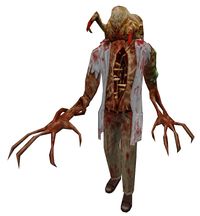 The improvements coming from the High Definition Pack mainly stem from the increased polygon count over the default Half-Life models. However, despite the increased level of detail, the style of some of the models, most noticeably the HECU Marines, have been changed. Consequently, while the models are improved in terms of the level of detail, it remains a matter of opinion as to whether they look better.

The upgraded character models in the High Definition Pack included the scientists, security guards, and HECU soldiers, as well as several of the Xen creatures. In addition, all of the weapon models were upgraded as well. This included some notable changes to the game's original arsenal. The 9mm Pistol, originally based on a Glock 17, was replaced with a Beretta M9, and the Submachine Gun was replaced with an M4A1 carbine.[3] To reflect some of the weapon changes with the high definition models, new sounds were given to the shotgun and assault rifle, as well as new sprites for the game's HUD.

The High Definition Pack spawned from the canceled Dreamcast version of Half-Life, in which Blue Shift was included as a bonus addition to the game. The Dreamcast port boasted improved graphical content, and these models were eventually carried over to the PC after the game's cancellation.[3] However, they were evidently not directly converted as the models that appeared in the Dreamcast port appear to be earlier versions of what would finally comprise the High Definition Pack. The leaked version of the DC game included models that possessed some very noticeable differences from the finished high definition models, and even had some improved models not made part of the High Definition Pack at all. Earlier preview shots of the Dreamcast version shows yet even older incarnations of some of the high definition models.

The PlayStation 2 version of Half-Life saw even further improved models to the game, also created by Gearbox. This included full facial animation and individually-animated fingers.[3] As such, they're considered a continuation of the High Definition Pack. The PlayStation 2 port took advantage of a "Level of Detail" system, allowing these very detailed models up close without sacrificing performance. They were never officially released for the PC version of the game.

On August 25, 2005, the High Definition Pack was made available for free through Steam by Valve.[1] However, Valve was criticized for not using the fixed version of the models, which were already available in Gearbox's patch for Blue Shift.[4] These patched models re-included animations missing from the high definition models that, although did not appear in any of the official games, were commonly used in custom levels and modifications. Without these patched models, many modifications act erratically, as the missing animations can interrupt scripted sequences, possibly preventing the player from continuing or even crashing the game.[4] Many also complained at how the High Definition Pack was implemented in the program. When enabled, Steam automatically disables the use of any other custom content.[4] On January 24, 2013, when macOS and Linux support was added to Half-Life, the High Definition Pack became mandatory. On February 1, 2013, a command line flag "-nohdmodels" allowing to disable the High Definition Pack was announced.[5] Later, it was made switchable in the game video options.