"Why do we all have to wear these ridiculous ties?"
― Black Mesa scientist[src]

Each scientist is granted a different security clearance specific to their duty, with an average clearance of Level 5. Like other employees, scientists have an assigned uniform, consisting of a blue shirt, white lab coat, red striped tie and white (or beige) slacks. In Opposing Force, a cleansuit-wearing variation of the normal scientist appears in limited areas. HEV scientists are trained in the use of the Submachine Gun as part of Hazard Course training, but most of the Science Team have little or no combat skills or experience.

Although cowardly and clumsy at times, scientists can assist the player with certain tasks such as using retinal scanners to open doors, but they also tend to be physically weak, dying within a few shots. Scientists have some first aid skills and will administer a 25-point medicine boost to a wounded player with a health level under 50. Cleansuit scientists do not have this ability. 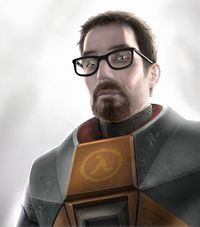 Originally, the four original scientist types were simply named from 01 to 04 in the Half-Life textures files. When the Half-Life High Definition Pack was released, they were given actual names. "Scientist 01" was named "Walter", a nod to Walter's World, a popular fan fiction set in the Half-Life universe created by Kevin "Fragmaster" Bowen on Planet Half-Life. It had been previously nodded to in Opposing Force, when a scientist using the same model, Walter Bennet, was mentioned, before appearing at the end of Blue Shift. "Scientist 02" was named "Einstein", for his likeliness to Albert Einstein. "Scientist 03" was named "Luther", probably a nod to Martin Luther King. "Scientist 04" was named "Slick", referring to his slicked back hair.

All of the idle scientist chatter lines in Half-Life had been written by Kelly Bailey.[4]

Combine OverWiki has a list of quotes for Black Mesa Science Team.
Retrieved from "https://combineoverwiki.net/index.php?title=Black_Mesa_Science_Team&oldid=462591"
Categories: