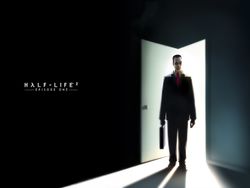 As ambiguous as the G-Man.

The canon of the Half-Life and Portal series has never been officially defined by Valve. Series writer Marc Laidlaw stated that the issue of canon is "something the fans came up with"[1] and that they do not have an official stance on it.[2] He remarked that they "do not get involved in issues of canonicity" and that "canon itself is non-canon", letting the games stand on their own.[1][2] Valve also chooses not to define a precise timeline as they would only end up contradicting themselves in the future.[3] As such, a handful of retcons have occurred throughout the series.

As no official definition of canon exists for the Half-Life and Portal series, the use of the term "canon" here on the Combine OverWiki is meant strictly for browsing convenience purposes to distinguish between sources that contribute to the series' overarching storyline and sources that do not. The following list is not official and should not be taken as rule.

Behind the scenes media