"Colonel" Odessa Cubbage is a Resistance leader situated at the eponymous Coast outpost, New Little Odessa. When Gordon Freeman reaches N.L.O. during his journey along the Coast, Cubbage is found in the main building's basement explaining the use of the RPG to some of his troops, before handing the weapon to Gordon for use in an ensuing Gunship battle.

At some point during the organization of the Resistance along the Coast, Odessa Cubbage ended up leader of New Little Odessa.

Much about the Colonel is open to question among the Resistance: from his slightly askew mustache, to his supposedly Received Pronunciation accent, which many suspect is as false as the military exploits with which he regales his followers. He may not even be a colonel at all, and simply a former member of the University of Rochester Security Services, given his coat. In times of peril, this "royal coward" also tends to hide and never expose himself to any actual danger, dispatching firm orders to his "starry-eyed contingent" and bravely sending warnings to neighboring outposts while never exposing himself to the slightest personal harm. It is also unknown if he gave his name to the Resistance outpost or if he used the existing name for himself.[1][2][3]

Odessa Cubbage introducing the RPG. John Patrick Lowrie, Cubbage's voice actor, has picked this screenshot from the wiki for his personal blog.

Cubbage is first mentioned at the end of the Half-Life 2 chapter "We Don't Go To Ravenholm...", when Leon tries to contact him from Shorepoint.

He is then met in the flesh in the chapter Highway 17. Before Freeman reaches New Little Odessa, Cubbage can be seen speaking with the G-Man by looking towards N.L.O. through Combine Binoculars on the opposite end of the bay. G-Man's visit is never mentioned whilst Gordon reaches N.L.O., therefore it is unknown what he came doing there, whether it was sending a warning about the Gunship attack or providing supplies.

When Gordon Freeman arrives at N.L.O. en route to Nova Prospekt, he is directed by a Rebel into the basement of the main N.L.O. building, where Cubbage is briefing other Rebels on the use of the RPG against Combine Gunships. Looking for a volunteer to test it, and spotting Gordon, Cubbage hands him the weapon and gives him a quick tutorial on using the launcher's laser guide and how it can allow for the rockets to be steered past the defenses of a Gunship.

After the Gunship fight, with the base saved from defeat, Cubbage sends Freeman on his way, telling members of his team to open the gate allowing Gordon to travel further along the Coast. He also warns Freeman that since a base near the bridge on the way to Nova Prospekt, Bridge Point, has maintained radio silence, it has probably fallen under Combine control. Cubbage can be last seen communicating via radio to Lighthouse Point, the Resistance base located after Bridge Point. His fate afterwards remains unknown.

In Half-Life 2: Episode One, Alyx refers to Odessa by sarcastically claiming that he is her father after a Rebel from a small group asks her if she is Isaac Kleiner's daughter. Later, the Consoling Couple, part of the same group, can be overheard talking about Odessa, among other things. The man says he blames him for the situation, the woman states she has met him once, and that she considers he is an idiot. Other Rebels during the game will occasionally refer to him by asking Gordon if he was there when Cubbage took down the Gunship, suggesting that Odessa may have taken the credit for Gordon's help. 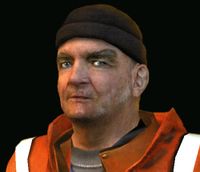 Combine OverWiki has a list of quotes for Odessa Cubbage.
Retrieved from "https://combineoverwiki.net/index.php?title=Odessa_Cubbage&oldid=443267"
Categories: