Moondust (full title Moondust: Knuckles Tech Demos) is an open-source technology demo made by Valve to demonstrate the capabilities of the VR controller Knuckles EV2. It is to be used and experimented on by developers through its source files made publicly available.[1][2]

At the request of the publisher, it is unlisted on the Steam store and will not appear in search.[3]

In the demo, the player plays a giant Aperture Science robot sent to the Moon in a rocket. Aperture's moondust-based Conversion Gel stores are running dangerously low, making the company look to the stars for a new source of the valuable portal conductor, thus launching the Aperture Lunar Resources Initiative.[3]

While the Aperture Science and Black Mesa logos were initially present on the various devices, they were replaced in later versions by a generic Moon pictogram so that the game's source could be released without copyright issues and any people could use most of the assets freely.[4] 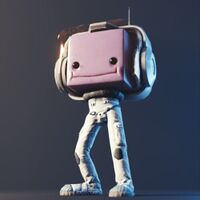 The scenes are populated with "JoeJeffs", rectangular cuboids coming in various colors, with legs but no arms, dressed as astronauts, and with various hats placed on their helmets (top hat, "JJ" cap, cowboy hat, and party hat).[5][6] If one is killed, another usually spawns back through a portal from the ground (only in BuggyBuddy and Throwing Range).

JoeJeff was originally a character created as an example for third person control in the SteamVR Unity Plugin, through which it can be controlled, and it which he just wears a pair of jeans and boots. Moondust's team then decided to include many of them in version 3.0, adding some life and interactivity to the game.[7]

He appears in all three of Valve's Portal-themed VR demos: he was originally to appear with his father JosephJeffrey in the Postcards experiment of The Lab, but it was ultimately cut. The feature can be restored by editing the game's files; meanwhile, they only survive in the game files and as doodles on the hub's whiteboard. In Aperture Hand Lab, one can be see sitting on the frame of the outer wall of the elevator's shaft by going beyond the play area.

The game starts in a round room inside a lunar module of an Aperture Science moon base, with "Moondust Theme" playing, and with in the center the scene selector consisting of a miniature of the base. Hanging from the ceiling are JoeJeff banners, a gold statue of the JoeJeff riding the rocket from the game's cover art, and miniatures of the Earth and the Moon. Under the banners are two empty JoeJeff spacesuits. Outside can be seen the rocket, solar panels, and the blue rover.

The game consists of four scenes / sections, set to tracks from the Portal 2 soundtrack. They can be accessed at any time by displaying the scene selector and choosing the scene from it, then the miniature flips down and an Aperture Science Face-Mounted Portal Spheres teleports the player to the selected scene. Before using the miniature, the scenes were accessed by using just Portal Spheres always floating nearby, like in The Lab.

Set to the track "15 Acres of Broken Glass", this activity showcases the main purpose of the robot worker while on the Moon, which is playing a vital part of the Conversion Gel production pipeline by harvesting Moon rocks to create the gel. Harvested Moon rocks arrive from underground on a conveyor belt and then pile up in an Excursion Funnel, waiting to be picked up. They are then crushed into moondust by hand by the robot above the grill of the Conversion Gel Converter, and then sent to Earth with the rocket. A gauge is displayed near the rocket; once it is full, the rocket will leave for Earth. There many JoeJeffs are sitting on the various elements, observing the robot's work. Others are in the nearby lunar habitats.

The scene is designed to showcase the pressure sensitivity, finger tracking and pickup capabilities of the Knuckles controller.[1]

Set to the track "Space Phase" in a Material Emancipation Grill dome, it consists of a test drive of two radio-controlled white and orange lunar rovers initially bearing the Aperture Science and Black Mesa logos, respectively. The surrounding Material Emancipation Grill will vaporize any buggy driving past it, after which it will automatically be respawned through a portal on the ground. JoeJeffs populate the dome and will run away if chased by one of the rovers, providing either an obstacle or a target, depending on the player's "moral fortitude". The scene's name was originally written as BuggyBuddy™, which was removed later.

This section features 5 racetracks / minigames, with global leaderboards, added in version 3.0 and accessible by teleporting to the related colored areas, in the same way as in the photogrammetry-made areas in The Lab and SteamVR Home. The racetracks include Celestial Sprint, Liftoff, Looper, and Luna Circuit, as well as the self-explanatory minigame Kill All JoeJeffs.

The scene is designed to showcase natural tool use and the thumbstick, track button, and face button functionalities.[1]

Set to the track "Robot Waiting Room #2", it consists of throwing objects at targets spread out in a small valley, namely an infinite supply of grenades and squishy turrets. The grenades can be primed with a squeeze (using the force sensors), then thrown at any time within the next four seconds. An anti-gravity device can be used to influence the force of the throw. Grenade can be thrown among the JoeJeffs, prompting them to run for their lives and sending them flying in all directions when hit. Turrets are used to play fetch with the JoeJeffs; one will always bring a turret back to the player thanks to a zero-point energy field manipulator-like feature appearing as a green glow on top of his helmet, similar to the Lab's Fetchbot.

The scene mostly experiments throwing mechanics in VR and its throwbacks. The squishy turrets also show the fidelity of the analog force values in both the track button and the grip.[1]

Set to the track "999999", it is the only activity set in orbit, consisting of assembling space stations by choosing various elements on a console that spawn indefinitely. Objects can be removed with a remote with the end similar to that of the ASHPD. A JoeJeff orbits the Moon, and Wheatley can also be seen doing so, from an area closer to the player. JoeJeffs are also floating inside the habitable capsule elements.

The scene is designed to showcase motor interactions through fine interaction, with small objects and precise placement.[1]