The Half-Life 2 leak, also referred to as the Half-Life 2 beta by the community, is an incomplete version of Half-Life 2 that was leaked onto the internet by hackers on October 7, 2003.[1][2]

In 2002, Axel Gembe, a young German programmer, whose favorite game is Half-Life, had the idea to hack into Valve's network to find something about the sequel. He wasn't expecting to get anywhere, but he succeeded at his first attempt by accident. He scanned Valve's network to check for accessible web servers where he believed the information about the game might be held. The network was secure from the outside, but their name server allowed anonymous AXFRs, which gave him quite a bit of information.

Asynchronous Full Zone Transfer (AXFR) is a tool used for synchronizing servers. It is also a protocol used by hackers to peek at a website's data. By transferring this data, he was able to discover the names of all the sub-domains of the company's web directory. In the port scan logs, he found a server which was in Valve's network range from another corporation named Tangis, a company specialized in wearable computing devices and was managed by Gabe Newell's brother, Dan.

Valve didn't firewall this server from its internal network. Gembe had found an unguarded tunnel into the network on his first attempt. Valve's Primary Domain Controller had a username "build" with a blank password. He was able to crack the passwords in no time. Once he had done that, he had full access to everything.

Gembe began to search for information about the game. He found various design documents and notes about its creation. As the weeks passed, he realized that nobody at Valve had noticed he was inside the company's network. He began to push a little harder. That's when he found the source for the game. On September 19, 2003, Gembe downloaded the unfinished game code. The game didn't run on his computer, so he made some code changes to get it to run in a basic form. He only had the main development "trunk" of the game. They had many developed branches that he couldn't even begin to check them all out.

The source code for the Source engine on October 2, 2003; and an unfinished version of the game on October 7 were leaked on the internet by a friend of Gembe.[1] Gabe Newell publicly explained the situation on fan website, Halflife2.net (now ValveTime) forums and asked for help from the community to track down the hackers.[2] Gembe was eventually arrested. However, his charges weren't related to the leak. 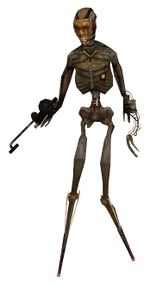 The Stalker as seen in the leak.

Along with the playable game, a map pack of Half-Life 2 maps from various stages of the game's production were leaked.

From 2016 to 2017, Valve game assets shared by Valve to developers through a repository were revealed to contain material related to the development of Half-Life 2, Half-Life 2: Episode One, Half-Life 2: Episode Two, Portal, and Counter-Strike: Global Offensive. Some of them were sparingly shared on the Facepunch forums.[3] The legitimacy of these assets cannot be completely confirmed.