Future of the Half-Life series 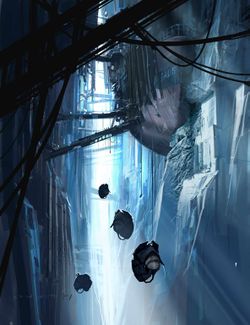 Combine Advisors around the Borealis in the third Episode Three concept art image, created in 2007 and released in 2008.

Since the release of Half-Life 2: Episode Two within the The Orange Box on October 9, 2007, little news regarding the fate of the subsequent third and concluding chapter in the episodic trilogy has been revealed. The following is a timeline of known information pertaining to the future of the Half-Life franchise.

On June 28, 1999, the domain half-life3.com is registered under the same details as half-life2.com with Valve cited as the contact.[1] The URL simply redirected to the Orange Box website for several years until the domain lapsed in early 2014. 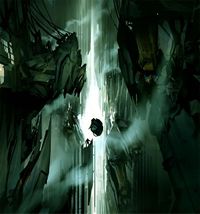 Gordon Freeman face to face with an Advisor in the second Episode Three concept art image.

List of the hint nodes found in the Alien Swarm SDK.

The two Half-Life fans picketing outside of Valve met by Gabe Newell in August 2011. 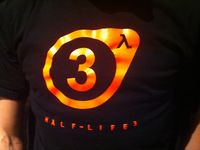 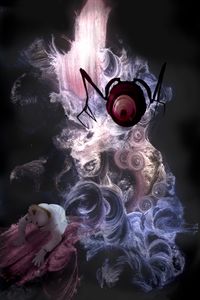 Advisor cornering an individual in Xen.

On May 15, Minh Le, a former Valve employee and the co-creator of Counter-Strike, states during an interview with goRGNtv that he "did see something that looked kinda like in the Half-Life universe" and "it wouldn't surprise anyone" if he said "they're working on it." He also stated that he "did see some concept art for Half-Life 3," although he did not specify as to when this occurred.[49]

A vast portion of the hl3.txt file consists of Half-Life 2 code ported over to Source 2 with some changes and additions. It includes the Base AI functions (such as companions, squad following, scripted sequences) from Half-Life 2, a possible quest system, virtual reality settings in the map properties (enable VR Chaperone, VR Movement), and many other features. The listed entities include npc_quest_citizen, npc_hunter_invincible, npc_turret_ceiling_pulse (Combine Pulse Ceiling Turret, a new enemy), and props_zipline, item_generic.

The quest system is referenced by several entities, such as info_quest_dialog, and point_quest_goal. Moreover, a variation of the npc_citizen entity, called npc_quest_citizen, is apparently able to become a "Quest Member".[i] When this option is enabled, the character becomes friendly/neutral towards to Combine units and doesn't take any damage from their attacks. Other new Citizen attributes include beckon_approach_enabled,[i] beckon_radius,[i] approach_radius,[i] and combat_enabled.[i]

A possible Left 4 Dead-style AI Director for procedurally generated enemy placements, similar to the version used in Left 4 Dead 2. The level designers have more control over the spawns. There are hints of a possible game mode with multiple players referenced in the attributes of item_generic. These include: Associated PlayerCounter Name (HL3 only)[i], Pickup prevents respawning (HL3 only)[i].

On August 24, Laidlaw released a short story on his website entitled "Epistle 3"[54] which garnered great attention from the community. Presented as a letter, the writer gives an account of what appears to be a summary of the storyline following Episode Two written with numerous code names in place of the actual Half-Life 2 series characters and elements. Laidlaw later referred to the story as a "fanfic" and a "snapshot of a dream [he] had many years ago."[55] The story was removed from his site around May of 2022.

On August 28, 2022, several unseen pieces of Half-Life-related concept art from post-Episode Two projects were released to the public.[58] These are purported to come not only from Episode Three/Half-Life 3 but also an unannounced and hitherto unknown cancelled game said to have been based around Alyx and Dog as the main characters that was separate from the Episodes.[59] These scans were provided by a private collector of Valve memorabilia who had acquired these pieces from a former Valve employee.[59] None of the artwork is dated.

A group of Episode Three images depicts a ravaged and debris-strewn environment, two showing a dry coastline with the wreckage of multiple boats scattered across the land and the other two revealing a Citadel standing in the distance. Other identifiable elements present here are several Hunter-Choppers seen flying towards the Citadel, a Hunter in the foreground, and a group of three silhouetted people common to all four images said to be included by the artist for scale purposes.[60] An additional image attributed to Episode Three shows an unidentified hallway.

In the last two Episode Three concepts, of notable interest is artwork for Dr. Breen in his host body, a concept often called "BreenGrub". It depicts him in a grotesque slug form that possesses a protruding deformed human head with two ears on one side of his face and a single emaciated arm alongside a sculpture of his bust from Half-Life 2. Along with this piece is a model render for another slug-like creature with scant human features that's specified as being an "Advisor Host Body", resembling the form of a juvenile Advisor that was cut from Episode Two. These two pieces are the only artwork clearly ascribed to a specific artist as Ted Backman's signature is visible in both.

The two concepts for the cancelled game featuring Alyx and Dog depict the two in an unknown heavily mountainous and rocky location.