"Reality is a story the mind tells itself. An artificial structure conjured into being by the calcium ion exchange of a million synaptic firings. A truth so strange it can only be lied into existence. And our mind can lie. Never doubt it..."
― Doug Rattmann[src]

Doug Rattmann,[2][3] also known as the Ratman,[5] is a former Aperture Science employee, and one of the few survivors of GLaDOS' flooding of the Enrichment Center with neurotoxin. Rattmann was introduced through his murals in Portal, and his story was expanded on in Portal 2: Lab Rat.

When working for Aperture, Rattmann was charged with the maintenance of the Aperture Image Format, an interactive graphics format created in 1985. He had access to Aperture Science's bulletin board system, with the login "drattmann" and the password "h0nee".[2] While he apparently never directly took part in GLaDOS' construction, it appears that he was somehow involved in the work on the modern version of the portal gun.

Rattmann and Henry chat while the latter is working on GLaDOS.

At some point late in GLaDOS' construction, Doug went to see his colleague Henry while he was working on the AI in her chamber. Henry praised their technological advances, stating that artificial consciousness is the next frontier. Doug was not convinced by the progress, since GLaDOS attempted to kill everyone each time she was turned on, forcing them to switch her off. Later, Doug came across Henry while he designing the Morality Core. Henry asked him to turn it on, then Doug asked him what it was, to which Henry answer it was the latest in AI inhibition technology, that it would act on GLaDOS as her conscience. Rattmann believed it was insufficient to stop her murderous intentions, arguing that "you can always ignore your conscience".[3] 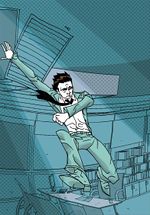 Rattmann jumps into the file room.

When GLaDOS was activated in 200-,[6] she became self-aware, locked down the facility, and flooded the Enrichment Center with deadly neurotoxins. Rattmann was one of the only survivors, and GLaDOS turned onto taunting him about his schizophrenia. She attempted to convince him that his situation was a result of his paranoia, but he ignored her, and got a hunch about a Test Subject, Chell, who he thought could make a difference. He fled to the file room and found her file. It said that she should not be tested, as she is abnormally stubborn and "never ever" gives up. Convinced she is the one he needs to stop GLaDOS, he put her on top of the Test Subject list, so that she would be the first to be picked in the next test.[3]

Rattmann then spent the next several months surviving in the Test Chambers and maintenance areas of Aperture. Having only two pills left, he kept them for the day GLaDOS would wake Chell. Consequently, he slowly lost his sanity, his schizophrenia completely taking him over. He spent hours scribbling on walls, painting murals, graffiti and arrows and hints for the day Chell would wake up and try to escape, and became obsessed with the Companion Cube that his schizophrenia made talk to him and give him advice, acting as his source of logic.[3] It also appears he had several Cubes, as his scribblings show him mourning over the loss of one. His scribbles and artwork on the walls could be a temporary fix to his illness. This can be inferred from Rattmann reading a book called, "Art Therapy" in the comic Portal 2: Lab Rat.

Although unseen for the entirety of Portal, Rattmann is made aware to Chell through his "Ratman dens", in which he appears to have been living for some time (sleeping on unfolded Aperture Science boxes, eating beans, and drinking milk and water), and his frantic scribblings and graffiti can be seen abundantly. The first den is found near Test Chamber 16, behind a broken wall held open by two Weighted Storage Cubes. It is here that the well-known statement "the cake is a lie" is written in black. The scribblings in Test Chamber 17 reveal further information, notably his obsession with the Companion Cube.

After Chell escapes incineration at the hands of GLaDOS in Test Chamber 19, she finds more and more of Rattmann's scribblings of help and warning, and the directions he previously laid to guide her through the hazardous innards of the facility.

Rattmann's hints stop just before GLaDOS' massive Sentry Turret ambush, suggesting he was unable to go on due to his lack of equipment against the Turrets, and that he trusted Chell to overcome them with her stubbornness and above all her ASHPD. 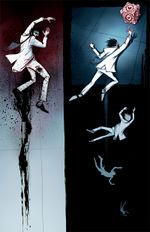 Doug passing out after being wounded by Sentry Turrets.

In Portal 2: Lab Rat, Rattmann is shown to be observing Chell during her quest through the final stages of Portal, and takes his two last anti-psychotic pills he was saving for that day in order to have a clear head. After Chell destroys GLaDOS, he follows her to the surface, considering taking the opportunity to escape once and for all, but upon seeing her being dragged back inside by the Party Escort Bot, he begins to feel guilty. Feeling he is responsible for her predicament (as he put her on top of the Test Subject list), he goes back into the facility to rescue her, despite his Companion Cube's objections.

Back in the facility, he discovers that Chell has been placed in a Cryo-Chamber in the Relaxation Center. He soon discovers that GLaDOS' explosion blew the main power grid, and that all the Cryo-Chambers are off-line. He attempts to reach Cryo-Control to rescue Chell, but without the advice of his Companion Cube, which is no longer talking due to the pills he previously took, he is incapable of choosing the right direction, and is shot in the leg by a Turret, falling unconscious. Upon regaining consciousness, he is back into his psychosis, discovering that he can no longer rescue Chell. However, the Companion Cube informs him that he can still save her by patching her Cryo-Chamber into the Reserve Grid, placing her in stasis for an unspecified amount of time, but saving her from death. After doing so, he goes to sleep in a Relaxation Vault.

The ASHPD in a Test Chamber filled with Ratman graffiti.

The exact fate of Doug Rattmann is unknown. In an interview from March 26, 2010, Valve said that he has died some time after the events of Portal.[1] However, at the end of Lab Rat, Doug is seen crawling into a Relaxation Vault after saving Chell.

Additional scribblings can be seen in Portal 2. Early during the game, Chell is required to enter one of his dens to find the single-portal ASHPD, in a room covered in murals detailing the events from GLaDOS's creation up to the end of Portal, as well as a large mural of Chell. Furthermore, one of the Portal 2 Achievements requires finding the hidden signal in one of Rattmann's dens. The Achievement icon is similar to that of the "Transmission Received" Achievement added to Portal during the Portal ARG. To complete it, an Aperture Science Radio must be taken into one of the Ratman dens (specifically, the one where the radio is received because the Aperture Science Vital Apparatus Vent is full of garbage). It produces an SSTV signal similar to the radios in the Portal ARG, showing an image of a Companion Cube on the Moon.

In one of the many alternative universes the player passes through on his journey, a younger Cave Johnson, former Junior Claim Representative of Aperture, is accusing Doug Rattmann, the president of Aperture Science in this universe, of embezzlement. 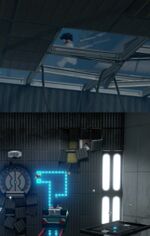 Two of the four Rattmann appearances in the game.

The non-canonical Lego Dimensions features several Rattmann scribblings here and there, as well as a hidden den featuring a Lego version of his portrait of Chell, with wings. Rattmann himself makes several brief appearances in Test Chambers 02, 06, 07, and 09, in his only direct appearance in any game. Players must be quick to get a glimpse of him as he tends to flee when spotted.[7]

As seen in Portal 2: Lab Rat, Rattmann appears to have a pupil larger than the other. This may be anisocoria, a condition characterized by an unequal size of the pupils. As for his face, his errancies in the Enrichment Center and his slow loss of sanity made it unrecognizable, gaunt and exhausted, with disheveled hair and beard, while he remained in scientist attire (labcoat and shirt), likely the most available outfit in the facility. 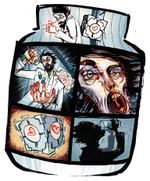 The effects of Doug's medication on his mind.

Prior to the activation of GLaDOS, despite already being schizophrenic and taking medication, Rattmann was otherwise quite sane and level-headed, and was skeptical and worried with the work on GLaDOS, believing that conscience was not enough to stop her, as opposed to Henry's enthusiasm. However, as time passed when he was trapped in the facility, he grew increasingly insane, and started being obsessed with the Companion Cube.

The results of the Aperture Science Collaborative Disposition Test tell that Rattmann is the quiet, artistic type, happy to ponder the solution to a puzzle in quiet solitude, and that compatible cooperative test partners include introspective loners, deaf-mute invisible people, and mannequins.

The scribblings seen in Portal show that Rattmann is an educated man, having a wide-ranging knowledge in the field of physics, and quoting both Dickinson and Longfellow to express himself over the loss of his Weighted Companion Cube, as well as a small reference to Auden. Rattmann's drawings range from simple scribbles to more elaborate artwork, such as a giant mural of Chell in Portal 2. Aside from his scribblings, Rattmann appears to have adept technical skills. Apparently using the login name and password he managed to procure, he was able to open up certain wall sections in Test Chambers or make Vital Apparatus Vents dispense more Weighted Storage Cubes. He is also able to create makeshift stoves out of computer heat sinks.

What follows is a list of all graffiti, scribblings and Aperture Science posters left by the Ratman in his dens. The texture files are used for better clarity.

A gallery of the artwork left by Doug Rattmann through the Enrichment Center made by artist Andrea Wicklund. When standing near most of the graffiti, a muffled, rambling voice can be heard. The voice is also featured in the song Ghost of Rattman on the Portal 2 soundtrack.