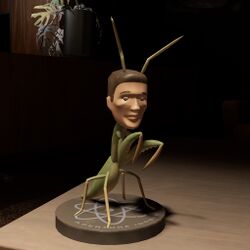 "Those of you who volunteered to be injected with praying mantis DNA, I've got some good news and some bad news. Bad news is we're postponing those tests indefinitely. Good news is we've got a much better test for you: fighting an army of mantis men! Pick up a rifle and follow the yellow line. You'll know when the test starts."
― Cave Johnson[src]

The Mantis Man is a human Aperture Science Test Subject who was injected with praying mantis DNA, transforming them into a mantis-like creature.

One of the first series of tests performed by Aperture Science when it was still named "Aperture Science Innovators", along with testing of the Aperture Science Portable Quantum Tunneling Device and Repulsion Gel, were tests of the effects of praying mantis DNA on the human body. The large number of resulting human-mantis hybrids (referred to by Cave Johnson as "mantis men") were themselves the subject of "testing" — namely, how long it would take to kill an army of them using rifles.

One of the possible alternate universes visited during the Perpetual Testing Initiative is of a universe inhabited by sapient mantises which the Aperture experiment was performed in reverse: creating "Man-Mantises" by injecting test subjects with human DNA.

There is another universe in which the Mantis Men from the experiments took over the facility and presumably killed the inhabitants. 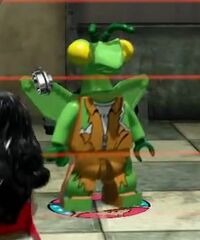 The Mantis Man is seen for the first time in the non-canon video game Lego Dimensions' Portal 2 Adventure World, trapped behind a laser field. It can be made operating a switch connected to a Pneumatic Diversity Vent. There is also a quest in which the player must fight 30 Mantis Men.

In the room outside of Cave Johnson's office, a Mantis Man bobblehead sits on a table. The figure is depicted as a praying mantis with a human head that has a pair of antennae. It stands on a base that has the logo for Aperture Innovations.

In Portal 2: The Official Guide from Future Press, Erik Wolpaw was asked about the fate of the Mantis Men; he jokingly replied that the answer "would be too big of a spoiler [for Portal 3]," but suggested that some of them may still live in the facility.[1]

While not Mantis Men proper, a secondary storyline in Aperture Desk Job involves watching the growing development of a praying mantis colony that lives within the floorboards of the facility.