Dr. Colette Green is a Black Mesa scientist involved in the Black Mesa Incident, and one of the two protagonists of Half-Life: Decay, the other being Gina Cross. 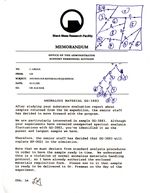 Green is a 31-year old[1] Research Associate with Level 4 security clearance assigned to the Anomalous Materials Laboratory in the Black Mesa Research Facility. She is a graduate of Carnegie Mellon[1] and has a Ph.D. in electrical engineering[1] and masters the robotics field as well.[1] Her personal HEV Suit is maroon colored.

As seen in the Half-Life PlayStation 2 instruction manual, Green received a memo from the Black Mesa Office of the Administrator's LM on May 11, 200-. In it, they tell her that the supervision team is particularly interested in Xen crystal sample GG-3883. Although Green's experiments on the sample revealed unexpected spectral analysis fluctuations, she has identified it as the purest and largest sample they have. Therefore sample GG-3883 will replace the original chosen sample, sample EP-0021, in the simulation. LM also states that they have already authorized the enclosed materials requisition form required to switch the samples, and that they are conscious that a sample change made so fast is a violation of normal anomalous material handling protocol.[1]

The Hazard Course Training schedule featured in the instruction manual also says Green was to be instructed by Isaac Kleiner for an Anomalous Materials Handling on May 14, 200-, at 19:00, but it was postponed to June. On May 18, 200-, at 08:00, she was to conduct a Public Relations Tour. Due to the Black Mesa Incident, these did not happen.[1] 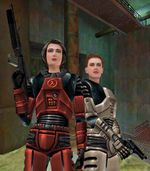 Colette and Gina Cross as seen in Decay.

In Decay, Dr. Green's role in the experiment is to make preparations in a room below the test chamber and initiate the Anti-Mass Spectrometer to run at 105%. Dr. Gina Cross also enters the same room to fix a jam in the specimen delivery system's lift mechanism, meaning they are both in the same place when the Resonance Cascade finally occurs.

Following the disaster, the two team up to fight their way through the facility for survival. They escort Dr. Rosenberg to the surface to call the military for help and then, with the help of Dr. Richard Keller, manage to start a resonance reversal to prevent the dimensional rift from becoming too large to be repaired.

The fate of Dr. Green, along with the rest of the survivors in Decay, is unknown to the other Black Mesa survivors.[2]

As heard in Decay, Colette seems to enjoy shooting enemies, and utters demented laughs when she starts attacking and defeats enemies, while Gina has a calm demeanor and sounds more pragmatic. Her tone in her other lines suggests she is a very vigorous and jumpy, sometimes relaxed person, while being an efficient partner for Gina.

Colette is voiced by Lani Minella. Her dialog mostly consists of status-specific lines similar to the ones spoken by security guards, but with a considerably more enthusiastic tone than that of the security guards or Gina.

Originally, Colette and Gina were both to wear orange HEV suits identical to Gordon's in Decay.[3] Lines from the security guards still make mention of the orange suits despite having been changed during development. When playing as Colette, the player's HUD is displayed in an orange-red color.

Unused biographical information for Colette can be found within the Decay game files in titles.txt, the source file for on-screen messages. The material presented here disagrees with the information given in the instruction manual. In the unused material, her age is stated to be 37, her administrative sponsor is left classified, and her Ph.D. does not include robotics.

"Colette" is a French first name derived from "Nicolette", itself the diminutive of "Nicole", itself the feminine form of Nicolas / Nicholas, from the Greek name "Nikolaos", meaning "victory of the people". Saint Colette was a 15th-century French nun who gave her money to the poor. This was also the pen name of the French author Sidonie-Gabrielle Colette.[4] "Green" is obviously related to the color, but more specifically, it was a descriptive name for someone who often wore the color green or someone who lived near a village green.[5]

Combine OverWiki has a list of quotes for Colette Green.
Retrieved from "https://combineoverwiki.net/index.php?title=Colette_Green&oldid=459898"
Categories: