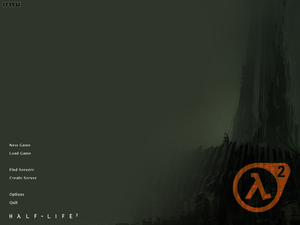 "There is a lot of value in refinement. There's an aggressive statement of this principle, which isn't entirely true but it's still interesting: It doesn't matter what we cut, so long as we cut it and it gives us the time to focus on other things, because any of the options will be bad unless they're finished, and any of them will be good if they are finished."
― Gabe Newell[src]

Within the Half-Life community, this period is referred to under several names. They include: 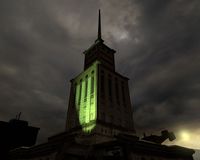 The book Half-Life 2: Raising the Bar and the numerous leaked files revealed many of the game's original settings and action that were either cut down or removed entirely from the final game. Half-Life 2 was originally intended to be a far darker game based on far grittier artwork where the Combine were more obviously draining the oceans for minerals and replacing the atmosphere with noxious, murky gases.

Half-Life 2 was also originally intended to be much more diverse in settings, and the original journey was extremely long (to the extent that the game felt almost overblown, with little time being spent on developing existing characters; one of the key reasons for it being cut). Several City 17 levels at the start of the game and complete chapters from the second half of the game were completely removed and sometimes re-introduced in the subsequent Half-Life 2 episodes.

Parts of the book Half-Life 2: Raising the Bar and the leaked files detail how Gordon would fight alongside characters such as Odell in the Borealis, as well as fighting together with Captain Vance and Vance's forces, the Conscripts, in the Air Exchange, the Weather Control and the rooftops of City 17. Originally, Eli and Alyx Vance had no relation, and Eli's lab was located in a cave in a scrapyard and was much rougher than the better equipped laboratory within a hydroelectric power station in the retail version (the scrapyard area where the Gravity Gun tutorial takes place, being an auxiliary area as opposed to the bulk of the lab, is reminiscent of the original concept). The Citadel also looked very different, it was more round than the bulky Citadel from the final version. 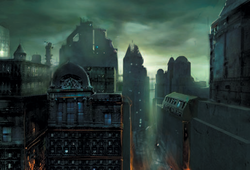 Concept art based on the skybox of Vertigo.

While the playable game leaked in 2003 is quite similar to the retail product and already heavily trimmed, this earlier period of development of the game shows a quite different style. At this point, City 17 was a menacing metropolis with many huge skyscrapers, resembling American cities, and had a very basic, blocky FPS design.[2] It was more faithful to the concept art seen in Raising the Bar: darker, gothic, sinister, rainy, foggy, gritty, with a lot of brick, metal and glass, getting along well with the cut concept of the Combine replacing the air with poisonous gas and draining the oceans. It was therefore a much more dystopian, Orwellian universe (even though the final product is still quite Orwellian) even with touches of cyberpunk/steampunk style, in the vein of the book/film 1984 or other films such as Dark City, City of Lost Children, Avalon or Blade Runner. It was also more faithful to Viktor Antonov's early concept art and work on the game.

The Combine was rather using and recycling the existent human materials and buildings, instead of adding their own technology to them. This is why, for instance, the early Citadel had its walls covered with tiles.

During the time span leading to the 2003 leak, the team added more periods, such as the 30's, the 40's and the 70's, to finally get to a more Eastern post-Communist style we see in the retail version of the game, with older and smaller buildings, and a bright universe instead of a dark one, which is more in the vein of the original Half-Life. The Ravenholm levels are a reminiscence to the original style, even though the American East Coast-style skyscrapers were all removed.

Note that not all the concepts were not present in the development process at the same time, since the game had still a very rough, work-in-progress state. 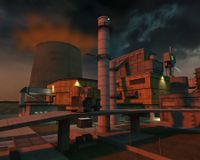 Inside the Air Exchange grounds.

A Breencast device attached to a Civil Protection building near the Manhack Arcade.

Other files consisted in a group of several zip files nicknamed "WC map pack" (WC stands for Worldcraft, the early name for Hammer, the level editor), containing around 1300 VMF maps (VMF stands for "Valve Map File") of the very early chapters already cut in the playable game mentioned above (most of them are repeated and almost identical), demo/prototype maps and the maps from the playable version, spread in around 60 folders named by the developers who worked on them, and making up around 3 gigabytes. These maps can be opened in Hammer and can be run in any Half-Life game after texture fixing (since several textures can be missing, especially the original Combine metal variations) and compiling into BSP maps (using the option "Create a Mod" in the SDK and putting the textures from the playable leak in its folder will do most of the preliminary work, as most of the textures will be missing if the compiled map is played on a released game). The maps still have the date they were last modified, which can give other clues about the game development. Most of the maps are very old and were last edited/created in 2001 or 2002.

The leaked files available on the Internet are obviously only parts of the original files used in the development of Half-Life 2, since many more maps, models, sounds, scripts, and textures were created, as well as more than 50,000 reference photos taken in USA and Europe used for design inspiration.[5][6] Despite the final game's release, these files are still illegal to redistribute.

Half-Life 2 originally featured friendly fire, as with Half-Life. Valve found this to be annoying to playtesters, as they would often accidentally kill their teammates, so it was changed so the weapons do no damage to friendlies. 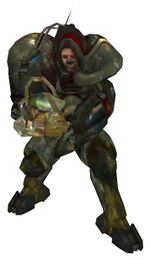 Fate of the cut material[edit]

Many of the cut concepts will never be reused. There are some exceptions, however, and some elements finally made their way into the released games.

An early version of the Citadel Core.

Since the release of the retail game in 2004, many attempts have been made to restore the original storyline by making mods based on the leaked files. Some mods never went further than rough development stages and some fixes while some are still in development. Also, some players fixed several maps without including them in a full game. These can be found across the web.

One of the most famous mods based on the Beta, and actually the only to have ever been released, though in an unfinished state, is Missing Information. While originally considered "illegal content" by Valve, it has since been deemed legal as long as it is distributed for free as a mod and does not use the original source code. The mod's current version includes the E3 2003 presentation and an incomplete Borealis chapter.

There is a line[i] that can be found in the Half-Life 2 leak, which was to be said by a security guard in a port of the Hazard Course from the original game. The line is: "Sorry, sir. You know I can't let you through here without your good friend Superfly Johnson. Wa hah. Just kidding, Gordon. You go on through. Hah haha!". This is a reference to Superfly Johnson character from the video game Daikatana, best known for his poor pathfinding skills. He is an ally, and has to follow the player through some levels. If the player reaches a loading point and the character is not with the player, the player character will say: "I can't leave without my buddy, Superfly!". It also a reference to a line[i] said by the security guard when Gordon tries to go through a checkpoint without his suit on. The line is: "Sorry, Mr. Freeman, I got explicit orders not to let you through without your hazard suit on."

See these related articles for more information on the early Half-Life 2:

Combine OverWiki has more images related to Development of Half-Life 2.

Mods based on the development of Half-Life 2[edit]