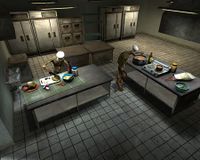 "I don't know about you, but I'm ready to join Civil Protection just to get a decent meal."
― Rebel[src]