A Combine City is what the Combine have made of Earth's major cities. 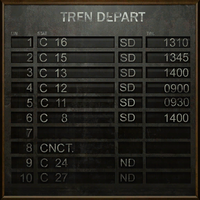 The train schedule as seen in the City 17 Trainstation.

City 40 and 49 are mentioned by Samuel in the vignette Now Arriving: City 17 in Half-Life 2: Raising the Bar, in which he states that most of the towns are identical from afar and that only inside is it possible to see how they were "before" (i.e. before the Seven Hour War and the Combine occupation).[2]