"Last poor son of a gun got blue paint. Hahaha. All joking aside, that did happen - broke every bone in his legs. Tragic. But informative. Or so I'm told."
― Cave Johnson[src]

Repulsion Gel, also known as Bounce Gel, is a testing element used in the Enrichment Center several decades before Portal and introduced in Portal 2. It is one of four types of Mobility Gels. 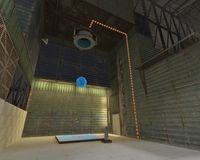 A portal is sent into Repulsion Gel by the ASHPD.