The Enrichment Shafts or Test Shafts, is a series of nine shafts located in the lowest levels (lower than 4375 m) of the Aperture Science Enrichment Center, in the salt mine originally bought by Cave Johnson in 1944, and used by Aperture Science for testing until around 1986. 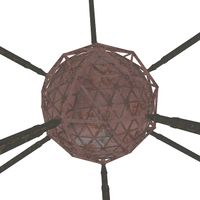 In Portal 2, the shafts visited are Test Shaft 09 and a second unidentified Test Shaft. Test Shaft 09 is featured in the sixth and seventh chapters of the game's single-player mode, The Fall and The Reunion, when Chell is forced to navigate through Test Shaft 09 with GLaDOS powered by a potato, after Wheatley sends them there. Test Shaft 09, also nicknamed "Zulu Bunsen", was used to test the Mobility Gels. The second Test Shaft is visited in the fifth chapter of Portal 2’s co-op mode, Mobility Gels, when ATLAS and P-body navigate through the shaft's Enrichment Spheres to reach and open the Human Vault. This shaft was also used to test the Mobility Gels, but in cooperation mode between two Test Subjects, and minus the Conversion Gel.

The construction of the known shafts are of a completely different style and level of technology than that of the modular, panel-dominated space of the modern facility. The shafts were initially unmonitored by GLaDOS due to her nonexistence when they were constructed. Consequently, pre-recorded messages from Aperture CEO Cave Johnson and his assistant Caroline were used to guide test subjects at least in Test Shaft 09. After GLaDOS' reactivation in Portal 2, she guides the robots in a second unnamed shaft.

As seen on the "You are here" image of the Enrichment Shaft series in Test Shaft 09, the shafts are typically made of 9 "Enrichment Spheres", "Geodomes" or "science spheres", where testing on various Aperture Science products was made in several smaller Test Chambers, closed, open, or semi-open to their surroundings, and numbered like the modern chambers. Test Shaft 09 however comprises only 7 spheres, while the co-op shaft comprises 11.

As seen in Test Shaft 09 again, a large elevator to be used by Test Subjects sometimes goes from the lowest levels to the surface.

In Robot Repair, the maintenance room used as the Robot Rehabilitation and Wellness Center is located in a large area connected to an unidentified Enrichment Shaft.