The Combine Elite is a specialized, higher-ranking Combine Soldier. Sporting a distinctive white uniform and helmet with a single red ocular lens, the Elite is the deadliest of the Combine Overwatch infantry.

Combine Elite with the Gravity Gun.

Combine Elites are equipped with improved body armor, made apparent by the larger neck guard and the increased protection it offers. Their helmets are also drastically different from those of regular soldiers, which possibly improve senses, indicated by the two miniature domes located where the ears of the soldier would be. Given its helmet, the Elite may only have one eye left, making it an artificial cyclops, and it may also have no ears at all. All of this seems to imply that the Elite has suffered massive anatomical alterations, although the extent of these changes is unknown, as an unmasked Elite is never seen in-game.

Elites are tougher, achieve better accuracy with their weapons, and inflict more overall damage than regular soldiers do. They typically carry Overwatch Standard Issue Pulse Rifles, and are able to use the weapon's secondary fire Energy Ball. They use this advantage without hesitation and with deadly accuracy.

Elites typically fight in squads of their own kind, but will occasionally operate with regular Combine Soldiers or, in rare cases, Hunters. They are generally reserved for more critical combat missions, where their deadly skills and efficiency are required. They also serve as Wallace Breen's personal guards in the Citadel. One of them takes the Gravity Gun from Freeman when the latter arrives at Breen's office in the Citadel.

Elites are first seen in the ninth chapter of Half-Life 2 at Nova Prospekt on a security monitor. They are encountered for the first time in person in the following chapter, Entanglement, assaulting the teleport chamber only seconds before Gordon and Alyx teleport out. 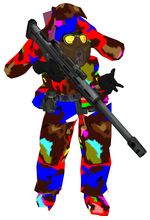 The broken camo Combine Elite model as found in the leak, with Sniper Rifle. 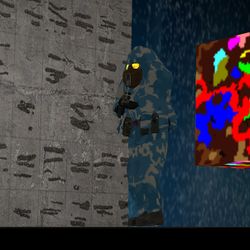 Demonstration of the early Elite camouflage abilities in the WC map pack test map camoroom, showing the camouflage mixing both textures at their junction.