"As you can see, you are not dead. Your PCV absorbed the damage at the cost of some of its power. Keep your PCV charged and your chances of survival in the field are very high."
― Drill Instructor Sharp[src]

The Powered Combat Vest, also simply known as the PCV, is a protective vest worn by the Hazardous Environment Combat Unit Marines and the Military Police in the Half-Life series. 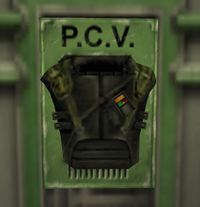 The PCV in situ.

Upon military approval, it entered use by the Hazardous Environment Combat Unit and certain elements of the Military Police.

Part of the combat equipment used by the HECU in their initial incursion into Black Mesa and during the events that occur throughout Half-Life storyline, the PCV is designed to protect the user from chemical, biological, radiological and physical threats during operations in the unit's defined battlespace. The vest increases the effectiveness and versatility of the user, allowing them to operate in environments which are outside the normal bounds of the regular infantry.

The PCV is compatible with a gas mask resembling the M40 Field Protective Mask with built-in Night vision goggles. In addition, the PCV includes a Geiger counter, morphine administrator (which allows the soldier to function normally even after serious injury), tactical radio, and a head-up display (HUD) in the protective mask lens which tracks the user's medical condition and weapon ammunition. The vest contains an on-board computer system that constantly monitors the user's health and vital signs, and reacts to any changes in the user's condition, though, unlike the HEV, there is no audible computer which alerts the user, and instead used a HUD in the helmet. Like the HEV, it absorbs 66% of the damage the player takes.

It may be noted that the PCV is comparable to the HEV Suit, which is worn by several Black Mesa personnel, including Gordon Freeman. This similarity is mostly attributed to the types of equipment included in both. In addition, the PCV's armor charge is also rechargeable at civilian, military or government electrical chargers, including those that are designed specifically for HEV Suits. This has led to fans speculating that the PCV is either a precursor, or a derivative of the HEV. However, the PCV includes night vision goggles, as opposed to the HEV Suit's flashlight. This suggests that the PCV is simply a military adaptation of HEV technology, combining the level of protection of an HEV Suit (which exceeds that of current flak vest technology) with night-vision technology that gives soldiers the considerable advantage of being able to operate at night. Another speculation is that since the PCV is military hardware designed for the battlefield where chargers are limited while the HEV is for research, the PCV's batteries may be designed to take in energy from whatever source available.