"Hello, and again, welcome to the Aperture Science Enrichment Center. We are currently experiencing technical difficulties due to circumstances of potentially apocalyptic significance beyond our control. However, thanks to Emergency Testing Protocols, testing can continue. These pre-recorded messages will provide instructional and motivational support, so that science can still be done, even in the event of environmental, social, economic, or structural collapse. The portal will open and emergency testing will begin in three. Two. One."
― Announcer[src]

During the course of Portal and Portal 2, it is used only by artificial beings to communicate with Aperture employees and Test Subjects, such as GLaDOS and Wheatley in direct messages, and the Announcer and Cave Johnson in pre-recorded messages.

Speaker system's speakers and monitor in a maintenance area.

In the Test Chambers, no intercoms are seen, while the AI voice resonates everywhere.

There are some visible intercoms in some places, however. In the employee and maintenance areas of Portal, a "speaker system" (according to its model name) appears to be used by GLaDOS to communicate with Chell during her escape. The speakers, often found alongside doors, have a small button on their front and are sometimes accompanied by a monitor. The monitors are never used by GLaDOS and always display an Aperture Laboratories logo along the bottom left of the screen fading between orange and yellow on a black background, resembling a screensaver. The button present on the speakers follows the same color fade. Attempting to interact with a speaker system device does not yield any results. The speaker system models come in "clean" and "dirty" versions, depending on the locations in which they are found.

In Portal 2, GLaDOS is no longer the sole AI to use the PA systems. An automated male voice, named "Announcer", is also used for monitoring the facility. Wheatley uses the PA system to monitor his own tests, while Cave Johnson's pre-recorded messages are used for Test Shaft 09's tests. Again, intercoms are almost never seen: one speaker is featured near the door of Chell's Relaxation Chamber in the Extended Relaxation Center. Furthermore, the "speaker system" from the first game is not seen anymore.

The Announcer serves to guide Test Subjects when no other supervision is available, such as a Central Core (GLaDOS). Narrated by a pre-recorded male voice, the system will give relevant information regarding the current Test Chamber and other facility status.

In the beginning of the single player campaign in Portal 2, Chell is accompanied by the Announcer through the first chambers of the game. The Announcer tries to calm Chell throughout the ruined Test Chambers, assuring that she has to continue with the testing as she is assumed to be the "future starter" due to the system working under the assumption that the planet has suffered an apocalyptic event.

The Announcer makes many assumptions about the current state of the Enrichment Center, and it is evident that the messages were put in place to cover all circumstances. For instance, one message alludes to an Animal King, though any advice it may have given is cut off towards the end.

It is hinted by Wheatley's dialogue that the Announcer has some small form of AI, and can also be deleted or stopped. This is seen when he states that he "let him keep his job." Moreover, when he yells at the system to shut up, it stops.

The Announcer's primary role within the Test Chambers is to maintain testing under extenuating circumstances, including such events as an apocalypse. Although statements are given in a calming nature, the voice never hesitates in mentioning events and such that pertain to the exact opposite.

The Announcer apparently represents the core of the Aperture Science computer system, as it is able to replace GLaDOS' core with Wheatley, though not without human intervention.

Whilst it can monitor the state of the facility, it is limited to a set of pre-programmed actions, which are not always helpful, to try and continue testing at all costs. For instance, it will only initiate a core transfer in the event that both cores agree to the transfer (or a stalemate is resolved by human means), and only does this in the event of the main core's corruption.

Although the Announcement System has the ability to put out the fire in the Stalemate Resolution Annex, it is unable to help prevent the Enrichment Center's reactor core from a meltdown when Wheatley ignores it.

In The Lab, a female Announcer, named "Lab Announcer", is used in the hub. In the Robot Repair and Slingshot experiments, Portal 2’s male Announcer instructs the player.

In Aperture Desk Job, a female Announcer gives a countdown when the automatic desk launch sequencer is engaged. She also briefly announces when Cave Johnson's backup power is activated.

After the unnamed protagonist is released from their incarceration at Aperture's maximum security correctional facility, another female voice identified as the Administrator (also called the Prison Warden in the credits) speaks over the address system and reads out the conditions and requirements of their parole which is largely interrupted by Grady. It is not specified if this is an automated system as well. 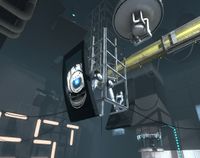 During the last chapters of Portal 2, Wheatley appears on large monitors attached in alcoves with Multitasking Arms. They can always be smashed, which will trigger comments by Wheatley.

While the Portal 2 monitor models bear her name, GLaDOS never uses them in her Portal 2 chambers, but she does in Lego Dimensions.

Combine OverWiki has a list of quotes for Aperture Science Announcement System.
Retrieved from "https://combineoverwiki.net/index.php?title=Aperture_Science_Announcement_System&oldid=459587"
Categories: