Overwatch Soldiers are the basic transhuman infantry units of the Combine Overwatch, composing the backbone of the Combine's military presence on Earth. In contrast to Civil Protection, whose duties are to enforce order within suppressed population centres, soldiers of the Overwatch are tasked with more hazardous actions requiring skill and tact: from patrolling the treacherous borders of Combine-controlled territory to raiding Resistance-held strongholds.

As military personnel as opposed to law enforcement, Combine Soldiers are given access to military-grade equipment and tactical combat training, making them more formidable opponents than Civil Protection Officers.

A stripped Overwatch Soldier. Its face texture is based on a picture of Valve's Eric Kirchmer, who was also one of the bases for Gordon Freeman's face. The very picture used in the texture is featured in Raising the Bar; the texture file is named "eric_tex_cylmap_evil2" in the Half-Life 2 leak files.

Standard Overwatch Soldiers, like other soldier variants, wear standard-issue blue and grey camo body armor over their torsos with padding on their arms, thighs, and groin. Several insignia can be found worn on their arm pads, signifying their position in the Combine regime. Perhaps the most advanced piece of equipment found on Overwatch Soldiers are their helmets, which cover the head entirely and are equipped with air filters. These helmets have glowing blue goggles, and appear to be a cross between an old Soviet PMG and PBF gas mask.

Overwatch Soldiers are equipped with Submachine Guns, shotguns or AR2 Pulse Rifles, as well as grenades. Using these standard-issue weapons, Overwatch Soldiers typically work in squads of four to six, each squad having at least one soldier armed with a shotgun and another armed with an AR2 Pulse Rifle. During combat, soldiers make use of squad tactics and will attempt to flank its enemies and cover each other.

Overwatch Soldiers are initially encountered in the coastal wasteland outside City 17, patrolling the highways for Resistance activity and staffing Combine outposts. They can, however, be found anywhere the Combine requires direct military action, as soldiers can be quickly transported to a desired area via Dropships. Overwatch Soldiers are also tasked with guarding high-security areas, monitoring Stalkers in the Citadel, and serving as guards in Nova Prospekt. In addition, they also serve as pilots and gunners of the Combine Hunter-Choppers.

Overwatch Soldiers are humans that have undergone extensive modifications including, but not limited to, brain and chest surgery, removal of genitalia, and implantation of various mechanical devices in the throat and around the abdomen.[source?] This procedure is carried out at Nova Prospekt and the Citadel. It is notable that in the B2 cell block of Nova Prospekt, after a few switches of a security monitor, a shirtless soldier can be seen lying on a table between two control panels. His eyes are open, indicating the soldier is not asleep, and is being prepared for clothing.

Despite the extensive surgery and modifications they receive, Overwatch Soldiers still appear to have certain human characteristics - for instance, they still feel pain, and during the Nova Prospekt chapter, Doctor Breen is giving what appears to be a morale-boosting speech to them, and they sometimes can be heard shouting expletives in the heat of battle, indicating that they still have human emotions to a certain extent (after throwing a grenade at certain Overwatch units, one can hear them say, "Shit!" before the grenade explodes).

Overwatch Soldiers communicate over radios, but unlike Civil Protection officers, they are not addressed or controlled by dispatchers, but instead use them to update military situations, such as saying, "Overwatch, sector is not secure." According to announcements made over the public address system of Nova Prospekt, punishments for failing to achieve objectives include "permanent off-world assignment". It was originally planned that Gordon's suit picked up radio transmissions from the Combine, though this idea was dropped in favor of simply hearing sound leaked from their helmets. 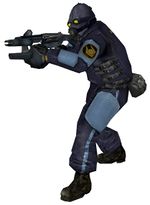 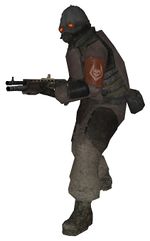 Being one of the most versatile units at the Combine's disposal, Overwatch Soldiers come in several varieties:

Prison Guards are tasked with guarding and maintaining the Nova Prospekt facility. These guards are almost exactly the same as a standard Overwatch Soldier, using the same weapons and having the same stats, the only difference being their appearance. Their armor is dark blue and they normally have yellow goggles, but the shotgun-wielding soldiers use red goggles. The words "Nova Prospekt" are emblazoned onto the back armor as well as their shoulder. They also have the standard badge similar to their Overwatch counterparts. Interestingly, some scripted radio transmissions that appear in bunkers and security rooms in Nova Prospekt speak in a much deeper voice than normal, and use different radio effects. The Prison Guards seem to use shotguns more often than normal Soldiers since the prison features predominantly close combat spaces.

Combine OverWiki has a list of quotes for Overwatch Soldier.