"They call him the Consul now. It worked fine for him. He speaks for the Combine; he shares in their power. As for the rest of us..."
― Eli Maxwell[src]

The Consul[1][2] is a character cut from Half-Life 2. He is the predecessor to Dr. Breen's character.[1] 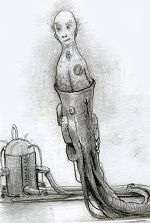 In the early stages of the game's production, Breen was not known as the "Administrator", but rather as the "Consul", who was a slightly different character,[1][3] more in the vein of Big Brother from the novel Nineteen Eighty-Four. He would have first been seen on posters plastering the train during the original opening sequence with propaganda phrases such as "The Consul says... relax" and "The Consul says... report". On these posters, he is described as having an owl-eyed solemn face that watched over the passengers.[1] He would later be formally introduced in Eli Maxwell's slideshow, shown in an image standing at the foot of a radio tower, wearing a headset, hands raised high to Dropships as he proclaimed Earth's surrender.[1] During the course of the game, only the Consul's face would be visible to the player on monitors throughout the city, eventually leading to a reveal at the end in which it is discovered the Consul had sacrificed much of his body to begin the process of becoming immortal through Combine artificial life-support technology.[1]

In the playable Half-Life 2 leak files, the only models being identified as that of the Consul models are a giant statue and a bust, which actually appear to be Wallace Breen. Sound clips for the early Breencasts can also be found in the files, in the folder /sound/C17/. Sound clips for a possible Citadel confrontation finale can also be found in the folder /temp/alyx/. In these lines, Alyx Vance lectures the Consul about him being "just another cog in the Combine machinery" and not a part of humanity anymore.[2] The sound clips for the other characters in this scene are not present. In the WC map pack, a prototype of his Citadel office depicted in concept art by Viktor Antonov can be found in the map proto_citadel_consul.[3]

The Consul statue might be inspired by that of Lenin that was to stand above the never completed supertall skyscraper Palace of Soviets in Moscow. The Skyscraper is also inspired by Stalinist architecture, being based on the Palace of Culture and Science in Warsaw. His name may be a reference to the consul title used in the Roman Republic and Empire.

Combine OverWiki has a list of quotes for The Consul.
Retrieved from "https://combineoverwiki.net/index.php?title=The_Consul&oldid=456732"
Categories: