From Combine OverWiki, the original Half-Life wiki and Portal wiki
(Redirected from Atlas and P-body)
Jump to: navigation, search

"These next tests require co-operation. Consequently, they have never been solved by a human. That's where you come in. You don't know pride, you don't know fear, you don't know anything. You'll be perfect."
—GLaDOS[src]

ATLAS and P-body, referred to as Blue and Orange by GLaDOS, are a pair of Robotic Associates[3] (bipedal Personality Construct-based androids) that are playable characters in Portal 2’s cooperative campaign.[4]

Designed by GLaDOS sometime during the single-player campaign, they are assigned the task of completing the Cooperative Testing Initiative in the Aperture Science Enrichment Center, previously uncompleted by human Test Subjects.[5]

P-body jumping through a portal with a Weighted Pivot Cube.

In the final levels of the single-player story of Portal 2, Wheatley discovers ATLAS and P-body while searching for other test subjects, as he believes Chell has been killed by his clumsiness. He then decides that he does not need Chell anymore, and attempts to kill her in a death trap. During the trap, GLaDOS; in her potato form, states that she created the robots to phase out human testing just before Chell escaped, and justifies it by reminding Chell that she did kill her. Because of this, it is assumed that the escape she mentions is the second escape earlier, in Portal 2, where Wheatley helped her escape, rather than the first in Portal, as Chell had yet to kill, or even meet, GLaDOS at that point. After Wheatley is defeated and sent into space, GLaDOS re-assumes control of the facility, and summons ATLAS and P-body, who can be seen greeting Chell when she re-awakens after being unconscious from her trip to space.

After giving Chell her freedom, GLaDOS then turns onto testing the robots. She first sends them through Calibration, in where she emphasizes the importance of teamwork in the tests, but also gives the first implications that it is a competition between them. They also rapidly starts gesturing, which annoys her, stating that the behavior is human-like. After Calibration, she then sends the robots through four test courses, each introducing new testing elements to challenge them.

At the end of the Team Building test course, she rebuilds ATLAS and P-body outside of the official testing tracks, simply briefing them that "This test is so outside the box, that I can't- I mean- won't even tell you what it's about". The two then proceed into a control room with a projector. A whiteboard displays the message, "DO NOT TRUST HER." Since the bots were designed not to think, the warning is ignored. ATLAS and P-body find a large disc and load it into the computer, which secretly grants her further control over the Enrichment Center. GLaDOS then reveals that the only way for her to bring the two back into the Hub, is to initiate their self-destruct sequence, then taunts them about their inability to communicate with one another the pain they feel. If the robots persist in making gestures rather than search for their objective, GLaDOS, angered, threatens to deduct 50 to 5,000 of their Science Collaboration Points.

It later becomes apparent that at the end of each testing course, she would send them outside the testing tracks, to serve as her minions without their knowledge. Through the rest of the three test courses GLaDOS trains ATLAS and P-body to expertly maneuver through their surroundings, which will be necessary to succeed in her true objective. After the bots have installed the remaining three discs into their respective inputs, GLaDOS states that "[she] can see everything now", then initiates ATLAS's and P-Body's self-destruct sequences. They are rebuilt inside the Hub where they are briefed on a new testing course, as GLaDOS moves the entrance to the course into the Hub.

ATLAS and P-body are dropped into the depths of the Enrichment Center, where they are sent to the unnamed Test Shaft, originally constructed by Aperture in the 1950s-70s era. She instructs them to make their way to the human vault at the end of the test. GLaDOS states that conducting tests on ATLAS and P-body, despite their being more loyal to her than any other Test Subject(s), is not as rewarding to her as testing humans, as human fear provides her with an endless source of satisfaction.[6] She also reveals that the Test Shaft was used to train them for the challenges awaiting them near the Human Vault. On their way to the Human Vault, a reprogrammed Defective Turret can be seen trying to defend the humans, indicating that some survivors of GLaDOS's original attack on the Aperture scientists and employees (with a neurotoxin) had crawled down there.

When ATLAS and P-body reach the Human Vault, it is discovered, to GLaDOS's chagrin, that vault can only be unlocked by specific gestures. GLaDOS convinces ATLAS and P-body to perform the gestures. With the vault successfully unlocked, ATLAS and P-body discover it houses hundreds, if not thousands, of human Test Subjects "stored" in Stasis Chambers. Though prone to brain damage from long-term stasis (decades longer than Chell's), GLaDOS, having achieved her true objective - human test subjects, gladly extracts them from the vault and begins examining their profiles while the humans are prepped for testing. Cooperative campaign's ending credits roll.

GLaDOS reassembles ATLAS and P-Body, informing them that they are 100,000 years in the future, where testing is just a form of art. After they explore several of her "exhibits", the disassemblers break down and she reveals that it's only been a week, all the humans are dead, and someone else has plugged themself into an old GLaDOS chassis and is trying to take over the facility.

As the facility continues to break down, GLaDOS tries to turn ATLAS and P-Body into "killing machines" by provoking and insulting them. Even though this fails, she sends them to inspect the old chassis anyway and murder whoever has taken it over, because the reassembly machines are failing.

ATLAS and P-Body enter the old chassis room to find that the bird from the single-player campaign is making a nest in the chassis. Although GLaDOS, suffering from a phobia of birds, urges the robots to retreat, they succeed in shooing the bird out of the facility. GLaDOS then hatches the eggs in a specially-built relaxation vault, and begins to treat the newborn birds as test subjects, observing that they are the perfect "killing machines".

Both ATLAS and P-body appear in The Lab’s sixth minigame, Robot Repair. ATLAS is supposed to be repaired while P-body pretends to be reading a magazine in the waiting room.

The game is played from the point of view of an ATLAS / P-body robot. Furthermore, three ATLAS robots are featured on a safety poster in the elevator, and P-body is briefly seen playing golf on another training platform below.

The robots were designed from scraps. ATLAS' design is based on a Personality Core, while P-body is based on a Sentry Turret.[1] To facilitate their humanization, they were given their own personalities, and clearly anthropomorphic designs and behaviors. Gender-wise, the robots have their own sex, as stated by Chet Faliszek in a interview (ATLAS as male, P-body as female).[7]

Each robot has its own Aperture Science Handheld Portal Device that bears the color of its user (blue for ATLAS, orange for P-body), as two lines running along the barrel. Each robot's portal gun produces two distinct colors of portal (ATLAS' are blue (primary) and violet (secondary); P-body's are yellow (primary) and red (secondary)). Both pairs of portals can exist at once, and either can pass through each others' portals, a vital means of completing the tests. They are respawned through Vital Apparatus Vents if destroyed. Duplicate robots are constantly built by automated machines, apparently keeping the memories and behavior of the previous incarnations.

Their heads function independently of their bodies, allowing them to control their limbs even if it is removed, although it renders them blind. This implies that their brains are in the bodies, rather than their head. This aspect of their design allows them to play pranks on each other by taking or knocking off their heads. They also have a night vision function in their eyes, although they apparently cannot control this themselves, only GLaDOS can activate and de-activate it remotely.

As said above, the robots were designed with anthropomorphic personalities to facilitate their humanization. These personalities are expected to develop during the course of the game.

Examples of anthropomorphism go from simple to complex behaviors. For instance, the results of the Aperture Science Collaborative Disposition Test tell that ATLAS is brave and fearless, willing to take on any challenge, while P-body is inquisitive and sensitive, examining the situation with care before proceeding, however, the co-op intro shows the opposite. Both value friendship, making them the ideal testing partners.

To a degree, they appear to being affected by GLaDOS' opinion on some matters. This is shown in Peer Review, when they discover the bird, as GLaDOS panics, exaggerating the birds danger. P-body appears to be daunted by these warnings, hanging back while ATLAS bravely approaches the bird to attack it. This behavior matches the personalities given in the Collaborative Disposition Test.

Other anthropomorphic behaviors include: making gestures to each other to indicate the other what to do or where to go; using some form of speech embodied by an apparently unintelligible robotic chatter (ATLAS having a masculine voice, P-body having a more feminine voice); using portals for fun and not only for testing; using some form of laughter; playing rock-paper-scissors; and hugging each other. Co-operative work also requires them to trust each other, and they undergo tests for that purpose. However, they eventually develop a tendency to betray each other (like humans), and in the end trust each other only 6 seconds longer than humans.[8]

The skills and personality are obviously influenced by the players' behavior toward each other. Tests or achievements require being selfless as much as being selfish. 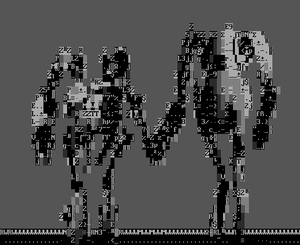 ASCII art image of the first revealed concept art of the robots, shown during the Portal ARG. 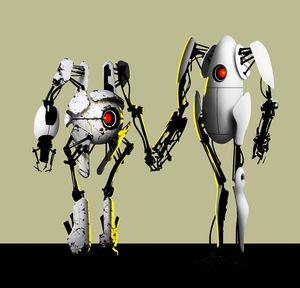 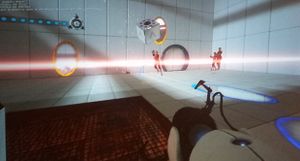