Xen (pronounced "zen"[5]), also referred to as the borderworld, is a separate overlapping dimension notably discovered by the Black Mesa science team, who regularly traveled there via portals to collect samples and study the myriad species of flora and fauna within. Xen is described as a "dimensional transit bottleneck--an area of continual contention."[6] It is the final retreat of Nihilanth's race, and a place to which most of the alien species appearing in the Half-Life series migrated to before coming to Earth during the Resonance Cascade. 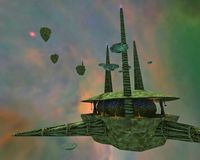 The exact fate of Xen after the death of the Nihilanth in Half-Life is unknown, though it is sometimes mentioned in further installations of the series. In Half-Life 2, Resistance teleports are dependent on Xen for intra-dimensional transportation, since the matter stream utilizes the borderworld as a slingshot to teleport into local space. The G-Man also stated at the end of Half-Life that he and his employers are in control of Xen after the defeat of Nihilanth. While the G-Man says this, dead Marines, the same ones sent to Black Mesa, a destroyed tank, and a downed fighter jet can be seen, showing the American military forces possibly having participation in capturing Xen, as well as the failure at their mission. However, this sequence could quite easily be a mistake and is supposed to take place on Earth, given that the ground texture is Earth sand, the scene would aesthetically fit on Earth at night, and that because the Goldsource Engine can't switch skyboxes mid-level, the skybox would remain that of Xen, instead of Earth. This is supported by Laidlaw's opinion, see the section "On military forces on Xen" here. 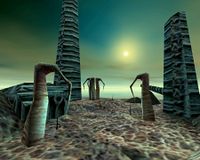 In Blue Shift, Barney Calhoun is sent to Xen by Dr. Rosenberg on a mission to tune the Focuser device that had been previously set up by a Survey Team in order to allow the old teleporter equipment in the Section A-17 Prototype Labs to be able to accurately define a teleport destination that would let them escape from the facility.