"Whoa! A Dropship! That must have been the crash we heard. White Forest sentries are doing their job."
― Alyx Vance[src]

The Combine Dropship, often simply referred to as a Dropship, is a Synth used by the Combine to quickly send units by air to areas they are needed.

The front and two rearmost pairs of "legs" on the craft contain engines that give the Dropship lift and movement; the front ones also hold retractable wings used for maneuvering. The middle four legs end in large suction pads which are used to carry various forms of cargo; they bear a resemblance to the mouths of terrestrial sea lampreys. In Half-Life: Alyx, there are red Combine logos on both tips of their wings. Dropships by themselves are unarmed and as a result don't attack the player; they also cannot be damaged by them.

Crashed Dropship Container in the Victory Mine.

Dropships usually carry a large, streamlined container that could transport up to six Overwatch Soldiers or Metrocops. A pulse turret is mounted on its front, which is designed to suppress any opposition in front of the Synth in order to allow the occupants to deploy safely; troops are also safe from grenades, as the wake of the Dropship pushes them away.

Although the Containers are heavily armored, they can still be destroyed with four RPG rockets. However, they are rarely lost to enemy fire, since Dropships usually don't stay in one place long enough for the Container to sustain that much damage. Another way to destroy a Container is to use a heavy pulse rifle, such as that mounted on the Airboat, which is able to wreck it within seconds.

In Alyx, their Containers are notably smaller and have a large Combine logo painted on the door.

Dropships are used for various purposes, including the quick transportation of troops - Combine Soldiers, Civil Protection officers, APCs, and Striders - to where ever they may be needed, the deployment of Rollermines along the Coast in groups of two to four, or the seizure of Resistance vehicles such as the Scout Car, as seen at the end of the battle lead at Lighthouse Point. 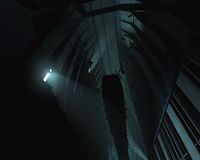 Dropship Containers being transported inside the Citadel.

Dropships are initially encountered by Gordon in the Canals during the chapter Water Hazard, the first one just after the ramp puzzle, the second one during the fight at the APC garage; they are used to deploy Civil Protection officers. Another unit appears later in the same chapter; its Container can be destroyed by the pulse rifle mounted on the Airboat. Dropships then are not seen until the chapter Highway 17, in which they are seen deploying Rollermines along the highway to hamper Gordon's movements. One dropship appears just before Gordon's arrival at Bridge Point. In the next chapter, two Dropships are encountered near a former Resistance base located before the next major outpost; four more appear during the ambush at the Lighthouse Point, each transporting six Combine Soldiers.

At the beginning of the chapter Anticitizen One, a Dropship appears on a street, transporting several Overwatch units. Unfortunately for the Synth, Gordon is accompanied by Dog, who is not only able to maul the troops, but also jumps on the aircraft whilst trying to attack it; the Dropship still manages to take off, though, with Dog attached. More of these aerial Synths appear while Gordon and Alyx try to deactivate a generator during the Battle of City 17. Dropships can then be seen in the chapter "Follow Freeman!", deploying troops on the roof of the Overwatch Nexus. At the end of the chapter, one more unit is encountered, carrying a Strider.

As Gordon makes his way through the Citadel in a Combine Prisoner Pod, he can see a line of Containers being transported, as well as Dropships sweeping above him and picking up their humanoid cargo to deposit them in the city below. 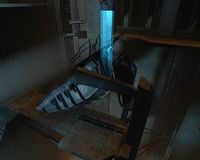 Dropship Container in the Citadel, presumably loading Rollermines to lay.

The first Dropship can be seen flying above the City 17 ruins at the very beginning of the game as Alyx Vance tries to establish a stable connection to her dad. Another one is encountered inside the Citadel, shortly before the elevator sequence, roaring over Gordon's head, and carrying a Strider. Within a few seconds after its appearance, it begins to wobble in the air, grazing the wall before striking and ricocheting off it, catching ﬁre, and dropping out of sight in a ﬁery tumble. The next unit can be seen transporting Overwatch Soldiers at the beginning of the chapter Urban Flight. The final two Dropships are encountered near the Technical Trainstation as Gordon escorts Citizens to safety.

Although Dropship are not seen until the chapter Under the Radar, several crashed Containers can be found in the Victory Mine. The Synth is first encountered by Gordon after he leaves The White Forest Inn; it is carrying a Strider. After it drops out of sight, a violent crash can be heard - the Dropship was apparently shot down by White Forest sentries. However, the tripodal Synth turns out to be undamaged, and attacks Gordon and Alyx when they arrive at the southern entrance of the major Resistance base.

In the secondary silo breach, Dropships were used to transport Overwatch Soldiers. Later, during the defense of White Forest in the chapter Our Mutual Fiend, several Dropships can be seen, each transporting a Strider.

In Half-Life: Alyx, Dropships play a relatively minor role. At the start of the game, several are seen flying towards the Citadel, presumably to transport materials or personnel. Additionally, in the opening video call, the Combine power generator Eli and Russell steal can be seen being unloaded from a Dropship Container, though it is the model used in Half-Life 2, not the one used in Half-Life: Alyx. A Dropship is also used to dispatch a Combine squad that carried out the safehouse raid and captured Eli Vance. Later on, they are occasionally spotted in the Quarantine Zone delivering troops into the battlefield.

The Synth was originally designed to not only drop enemies, but to walk on land as a large crablike creature.[3]

According to Brian Jacobson, the Dropship sequence inside the Citadel in Episode One was another case where Valve had to be clever about drawing the player's attention to a visually pleasant scene, which could be easily missed if they weren't looking in the right direction. The designers used a solitary Soldier firing at the player to show them the Dropship climbing into view.[5]

In the game files of Half-Life: Alyx there is an unused alternate skin for the Dropship which features a body with a much deeper shade of brown and the carapace painted a pale color similar to the Construction Strider with red markings.