The Submachine Gun, or simply known as SMG, is a weapon featured in Half-Life and its expansions. The primary weapon used by the HECU, it is an automatic weapon with a high rate of fire. It is also equipped with a grenade launcher that boosts its effectiveness. 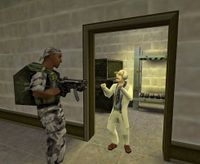 HECU Marine threatening a scientist with his Submachine Gun.