The reproductive suppression field was imposed by the Combine upon gaining dominance of Earth. It prevents human procreation as part of the Combine plan for the total extermination of the human race. 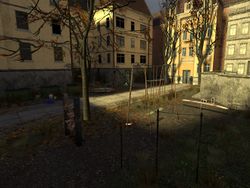 An empty playground in City 17.

The suppression field's main effects are to bring the human birth rate down to zero by prohibiting the formation of "certain protein chains important to the process of embryonic development," as Dr. Kleiner states in Episode One, making it impossible for conception to occur in any form. This effectively ensures that the humans currently alive will be the last generation to survive. As a result, no children can be found on Earth by the time of Gordon's arrival after his prolonged stasis following the Black Mesa Incident.

Dr. Breen addresses the issue of the suppression field to the people via a Breencast during the opening chapter of Half-Life 2 as a response to a letter written to him by a "concerned citizen," claiming that the field will be deactivated once humans prove they no longer need it. He also states that the field is suppressing "the urge to reproduce." However, this is a part of his propaganda grandstanding as it is seemingly contradicted by the fact that Civil Protection are promised "non-mechanical reproductive simulation"[1] as a reward for achievements in their service, which they would not be inclined to receive had they no such urges. Furthermore, many references of Citizen and Rebels expressing their desires to "mate" can be heard. For example, in Episode One, Resistance fighters may mock how, since the suppression field is down, they have permission from Kleiner to mate, remarking "Not that [they] needed permission anyways."

Series writer Marc Laidlaw initially stated that he imagined the suppression field "had an effect on a great deal of mammalian life,"[2] but later resolved that it "shouldn't" affect organisms other than humans, being a highly specific inhibitor. Nevertheless, he also stated that the Combine might not have been as selective as they intended.[3]

In Episode One, it is revealed by Kleiner during his hijacked broadcasts throughout City 17 that the near destruction of the Citadel brought about the shutdown of the suppression field. He suggests that everyone "should give serious consideration to doing [their] part for the revival of the species" if they have escaped the city. Alyx comments on the unusual nature of this directive, asking Gordon, "Is Dr. Kleiner really telling everyone to... 'get busy'?"

In Half-Life 2: Episode Two, when Alyx and Gordon reach White Forest and meet Eli, Alyx says she and Freeman make a good team. With a wink and a nod, Eli tells Gordon, "Now that the suppression field is down... we all have to do our part." After an embarrassed outburst from Alyx, he asks, "Can you blame an old man for wanting grandkids?" 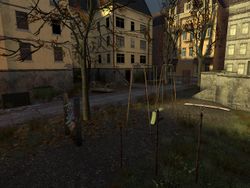 The playground after the uprising begins, where the track Suppression Field plays.
See also: List of Citizen models#Children

Originally, Half-Life 2 was to feature children, effectively countering the existence of the suppression field in early visions of the game's world. They were to be found notably in the Combine Factories where they would be working on producing Cremators.[4][5] Additionally, an instance of a child corpse was mentioned in concept art for Ravenholm, and one of the ambient sounds for the location in the final game is named town_child_scream1.[6] Consistent with the removal of children from Half-Life 2, the length of Gordon's stasis was changed from what was initially stated to be 10 years[7] to close to 20 years.[8]

When nearing the abandoned playground in the first chapter of Half-Life 2, the echoing sounds of children playing can be heard, an eerie scene alluding to the effects of the suppression field. This sound is internally named playground_memory.

Suppression Field is the title of a music track featured in Half-Life 2. The track's use during the game, playing when Gordon returns to the playground after the uprising in City 17 commences, is likely another reinforcement of the field's effects in this context of the abandoned playground equipment.

In Concerned, a webcomic parodying Half-Life 2, the protagonist Gordon Frohman is shown authoring a number of letters to Dr. Breen, including the one featured in the game that touches on the topic of the suppression field.[9] The comic's name was derived from the signature of the letter's sender, "A Concerned Citizen," mentioned in that propaganda broadcast.