"So, I see you've met Dr. Mossman. She's one of the main reasons I spend so much time outside."
― Alyx Vance[src]

Dr. Judith Mossman is a Resistance scientist introduced in Half-Life 2. She is a cunning and manipulative double agent, aiding both sides during the uprising but eventually siding with the Resistance. Later on she discovers a secret and powerful project that could be used against the Combine, in the vanished Aperture Science ship Borealis.

Before the Black Mesa Incident, Mossman was a promising, up-and-coming research scientist. She applied for the same post as Gordon Freeman at Black Mesa, but lost out to Freeman's Innsbruck experience (as said by Eli Vance in Black Mesa East) and Isaac Kleiner's personal recommendation.[2]

Years after the Combine invasion, Mossman became an important member of the Resistance base Black Mesa East, where she partnered with Eli Vance in making scientific advances to aid the Resistance war effort. Unbeknownst even to Alyx Vance, who disliked her, she also spied for the Combine, and reported directly to Dr. Wallace Breen. How and when she took on this role is not known, but Breen's impatience with her and his remark that the Combine "could have taken [Eli] at almost any time in the last several years" suggests that she acted as a double agent for some time before Freeman's reappearance. She also leaked the secret of uni-dimensional teleportation to the Combine, a technology they had previously lacked.

Eli and Mossman telling Gordon how they are pleased he is back, somehow mirroring one of the first Half-Life 2 screenshots.

Upon Gordon Freeman's arrival at Black Mesa East, Mossman takes him down to Eli's lab. She also intends to deliver the Anticitizen directly to Breen, but the Combine have followed Freeman to the base and attack ahead of her signal. They are able to capture Eli Vance; however, Freeman himself is able to escape in the ensuing chaos. Mossman is shown to be very unhappy with the Combine's treatment of Vance; Breen seems to have promised not to harm Vance when assaulting the Resistance position but without Freeman being present, Breen's patience wears thin, later telling Mossman that he did not feel bound to this agreement.

During Freeman and Alyx Vance's incursion into Nova Prospekt, they observe the transmission between Mossman and Breen revealing her duplicity. They successfully trap Mossman in her engineering lab before confronting her with the evidence of her betrayal. Mossman, however, is unrepentant, saying that she only ever had Eli's best interests at heart, and believed that only by cooperating with the Combine could Eli's life be spared and his scientific aims be fully realized. During their escape from Nova Prospekt using the Combine's prototype teleport, Mossman distracts Alyx by introducing an error into the system and in that time rerouting her and Eli's destination to the Citadel, stating that this is "the only way". This leaves Freeman and Alyx in the lurch as the teleport has a very long charging cycle before it can be reused. Only after an intense firefight with Combine troops are Gordon and Alyx able to use the teleport to escape to Kleiner's Lab, their original destination.

Mossman is present when Freeman finally reaches Breen's office at the top of the Citadel, trapped in a Combine Prisoner Pod. She tells Freeman, somewhat regretfully: "Don't struggle, it's no use. Until you're where he wants you there's nothing you can do... I'm sorry, Gordon". After Dr. Breen announces his intention of sending the captured Eli and Alyx Vance to the Combine Overworld, Mossman springs into action, threatening Breen with Alyx's EMP Tool, and sealing the main door to Breen's office. Revealing herself to Breen as a triple agent ("We're doing what I could never do alone. We're stopping you."), she attempts to free Gordon but is unable to stop Breen from escaping into the dark fusion reactor after he obliterates most of the room with the overcharged Gravity Gun. She then stays with Eli as Alyx and Gordon travel onwards to confront Breen who is heading to the portal.

Before the dark fusion reactor is destroyed and before Gordon and Alyx are rescued by Vortigaunts, Eli and Judith use one of Dr. Breen's escape pods to leave the Citadel, and reach a Vortigaunt camp, "way outside the city", possibly in the Outlands.[3] 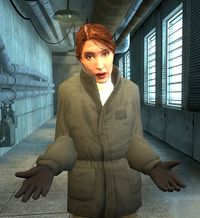 Judith finally reaches White Forest with Eli, and heads north in a helicopter right after they arrive,[4] tasked by Arne Magnusson to discover the Combine portal code, a vital piece of data needed to close off the impending Superportal the Combine deliberately set into being by destabilizing the Citadel Core. She succeeded in discovering this and transmitted the data in an encrypted video recording (which is intercepted by Combine agents). The transmission was discovered and then purloined by Alyx and Gordon during their attempt to stabilize the Citadel Core in Episode One; she was shown in an Arctic location, talking of a mysterious "project", but was forced to abruptly end her transmission when Combine forces discovered and attacked their base.

"I'm fairly sure I've pinned down the location of the Project. It's hard to say how much of it might have survived intact, or whether there's anything remaining that could compromise our work... if it were discovered by the Combine. We'll need to take a close look at it, of course, but I should be able to give a better opinion within a few hours. If the site is where we think it is, then it should be no more than... I'm going to cut this short. We may have been spotted."
― Judith Mossman[src]

In Episode Two, Magnusson, Vance and Kleiner retrieve the Portal code from Gordon and Alyx and use it to close off the Superportal. They also play her message and are successful in decoding the rest of it, discovering that the "project" is related to the mysterious Borealis, said to contain a secret so powerful that it could start a second Seven Hour War. At the end of the episode, Alyx and Gordon, believing that Mossman is still alive, equip a helicopter with the intention of heading north to search for her.

Mossman has a friendly if cunning personality, tempered by a certain amount of arrogance. She does not get on well with Alyx Vance, due to what Mossman considers is Alyx's blasé attitude towards the Resistance's scientific equipment, and also possibly due to Mossman's attraction to Alyx's father, Eli. According to Alyx, Mossman, despite her overtly courteous manner towards the protagonist, nurses resentment against Gordon Freeman due to his appointment over her at Black Mesa; she believes that "it should have been her in the test chamber that day". Despite her cynical manipulations of all of these characters, however, she is apparently able to reconcile her differences to defeat the Combine.

Mossman's double betrayal is open to interpretation and never fully explained during the course of the games. A likely explanation is that she had a change of heart in aiding the Combine after seeing Breen's callous treatment of Eli. However, it is also possible, particularly through her proclamation that taking Eli to Breen was "the only way", and her telling Gordon after his capture in the Citadel that until he is where Breen wants him, there is nothing he can do, that she planned the final confrontation in the Citadel from the beginning. Another theory, inferred from her conversations with Dr. Breen, is that she considered cooperation with the Combine as the only way to ensure Eli's safety; of course, this could also have been her way of throwing all parties off as to her intentions. 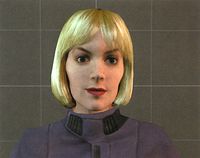 Combine OverWiki has a list of quotes for Judith Mossman.
Retrieved from "https://combineoverwiki.net/index.php?title=Judith_Mossman&oldid=402636"
Categories: