Dr. Breen's Private Reserve, stylized as "Dr>Breens Private Reserve" or simply ">B", is a brand of drink manufactured by the Combine, named after Earth's Administrator Wallace Breen and used as a propaganda tool. Vending machines for this drink are commonly seen around City 17. Like the water distributed by the Combine, the ">B" drink probably affects the health of Citizens too. 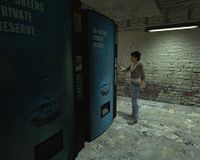 Similar to the ones seen in Half-Life and its expansions, the vending machines for this drink dispense blue cans with ">B" written on them when interacted with, although they are merely props and don't replenish the player's health. The first vending machine is seen at the very start of Half-Life 2 in the City 17 Trainstation, right after the turnstile; another one was apparently converted to open itself with a specific code and hides the entrance to Kleiner's Lab.

After departing with Barney in an interrogation room, a Metrocop purposefully knocks over a ">B" can with his Stun Baton and makes the player throw it in the trash while saying the words "Pick up that can", then laughing "All right. You can go" when the order has been followed. The player also has the option of throwing the can at the cop, leave it there and step back or throw it past the cop. Either way the cop will chase and hit the player. This was made to show the player how to pick up objects with the "Use" key, as well as how to throw them.

In Episode Two, in the Station 21 garage where Rebels are fixing cars near the Combine Autogun, a red ">B" can can be seen lying next to a car being repaired. This hints that other types of the drink are made, and the Rebel near the can either did not drink it or drank it regardless of the possible effects on his health. Later, both red and yellow cans can be seen on tables near a Lambda cache under a nearby tree.

The masculine robot spitting his drink.

The original vending machine prop was brush-based, used the generic "Cold Drinks" signage and was referenced from the real life model Vendo 427. It can be often found in several WC map pack maps, such as City 17 Trainstation, Ravenholm or Borealis maps. In the E3 map e3_phystown, this vending machine spits out a copious amount of yellow "T Dog" cans when damaged. Two early can models bearing the brand "T Dog", a yellow and a red one, can be found in the Half-Life 2 leak files, the first model, similar to the current one and featured in the Half-Life 2 leak, is a Pepsi machine;

The font used in the ">B" brand logos is Impact, the same font used for the Metrocop armband or the Black Mesa badge.

While the red and yellow ">B" variants are first seen in Episode Two, they have been informally featured as unused content since Half-Life 2.

">B" is featured at the end of the first Two Bots, One Wrench video, in a sequence during which the masculine robot takes a ">B" machine as a lubricant machine and drinks a can, after which the feminine robot reads on the machine "Breen's Private Reserve..." and adds "...of urine!", causing the other robot to spit all his drink.[1]