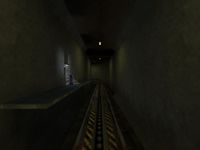 Barney Calhoun, an undecided major after two years at Martinson College,[4] is employed as a mid-level security officer at the Black Mesa Research Facility, with a Level 3 security clearance and as part of the Blue Shift High Security Unit. He is accommodated in the Area 8 Topside Dormitories.[4] He is friends with Gordon Freeman and Isaac Kleiner,[5][6] who are also employees of Black Mesa.

As a Black Mesa security guard, he is tasked with duties including guarding assigned sections, performing general maintenance, and assisting the science team when required. His "Disaster Response Priority" is to protect the Black Mesa facility and its equipment in the event of an emergency, with secondary priority to safeguard members of the science team whilst his own personal safety is of relatively low importance.[2][4]

Before May 12, 200-, Barney performed a retinal scan and had his salary increased. His two-day Security Guard Training was scheduled.[2]

On May 12 and May 13, at 08:00, Barney underwent a two-day Security Guard Training under the Miller-based holographic instructor (May 12 is the Blue Shift Hazard Course).[7]

The Blue Shift instruction manual features the sentence "Buy flowers for Lauren",[2] suggesting that Calhoun had a wife or girlfriend.

Walter and Rosenberg discussing their escape plans in Blue Shift.

Barney is seen at the very start of Gordon Freeman's tram ride to Sector C, knocking on the Area 3 Security Facilities door. He is not seen for the remainder of the game.

On May 16, 200-, at 8:42, Barney starts his tram ride from the Area 8 Topside Dormitories at Black Mesa, to start his second Blue Shift day at Area 3 Medium Security Facilities in Sector C.[2] He arrives there some time before 9:00.

After the Resonance Cascade occurs (at around 9:00), Barney becomes determined to escape from the Black Mesa facility. He locates and frees Dr. Rosenberg, who had been captured by the HECU troops. Rosenberg reveals to Barney his plan of escaping by using an old teleport model. Calhoun helps Rosenberg to prepare everything for successful teleportation. He first travels to the borderworld Xen, where he activates a device needed for teleport's correct work. Barney then locates, charges and delivers a spare power battery to Doctor Rosenberg. At the end of the game Barney, along with Rosenberg and his two colleagues, Simmons and Walter, manages to escape from the Black Mesa Research Facility, and he is described as being "out of range" by the textual summary, as compared to Gordon Freeman, listed as "hired," and Adrian Shephard, listed as "detained".

In the ending sequence of Half-Life: Decay, the main protagonists, Gina Cross and Colette Green, are caught in a harmonic reflux. During that time, they hear Dr. Rosenberg saying "Calhoun, you must hurry! We can't keep the portal open much longer!". In the next frame, what appears to be Barney is briefly seen jumping into the portal teleporting him from Xen, as seen in the Blue Shift chapter Focal Point. 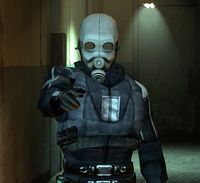 After the Portal Storms, the Seven Hour War, and the subsequent Combine takeover, Barney was presumably relocated to City 17 where he signed up for Civil Protection and became an officer as an undercover agent for the Resistance.[1] Working undercover, Barney was able to gain valuable inside information and distribute warnings about upcoming raids or provide misleading intelligence to the Combine though it was likely quite risky to his own safety. At some point before or after his relocation, he also came back into contact with Isaac Kleiner and Eli Vance who had also apparently been relocated to City 17 prior to Half-Life 2 and participated in their Resistance movement.

On one memorable occasion, Barney was assisting with Kleiner's teleport experiments where Kleiner attempted to transport a cat as a test experiment and something traumatizing happened to it. Barney claims to have persistent nightmares about the cat and even mistakes a distant Strider roar as a meow late in Half-Life 2.

By a twist of fate, probably orchestrated by the G-Man, Gordon Freeman is released from stasis into the City 17 Trainstation where Barney happens to be having his shift of Civil Protection duty. A security camera rejects Gordon's identity and Barney is able to 'take him away for questioning', saving him from boarding the train to Nova Prospekt and meeting a horrible fate in the depths of the complex. He then contacts Isaac Kleiner, they have a brief chat about how Gordon could get to his lab safely, then Barney lets Gordon escape through a backway.

Sometime later, Barney and Gordon meet up at Kleiner's Lab. After another teleport mishap that teleports Gordon to several different locations, Barney meets Gordon outside the lab and provides him with a crowbar, and directions to escape on foot to Eli's lab, via the Underground Railroad. Barney then goes back inside Kleiner's Lab, having to look after Kleiner. 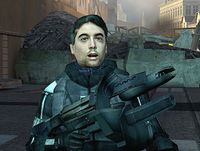 Later on, when Gordon and Alyx arrive at Kleiner's Lab from Nova Prospekt, they receive a video transmission from Barney, who needs help fighting the Combine in the streets of City 17.

During the uprising, Barney comes to be the impromptu "field commander" of the Resistance forces and leads the push towards the Citadel in order to rescue Eli Vance. At some point, he is pinned down by Combine Snipers that Gordon, finally reaching him, takes down. Together they lead a team of Rebels into the Overwatch Nexus to disable the Suppression Device. Barney uses his Civil Protection status to unlock several barriers Gordon would normally not be able to pass. After Gordon sets off towards the Citadel again, Barney continues to oversee the later stages of the assault on the Overwatch Nexus, until encountering Dog and following him to Gordon's location. Barney is last seen at the foot of the Citadel, telling Gordon "And if you see Dr. Breen, tell him I said, f*** you!". The swear can be heard completely in the audio file, but is covered in-game by sound effects (the subtitle is censored as well). 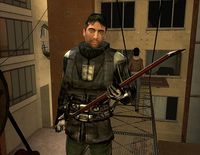 Barney is encountered late in the game, where he is seen organizing a Resistance push on a train station to escape City 17 before the Citadel self destructs. His appearance is slightly different with minor, untreated injuries to his head as well as small facial hair growth and an overall dirty complexion.

Barney briefs Alyx and Gordon before handing him a replacement crowbar and setting off to round up survivors in that sector of the city. He then waits for Gordon and Alyx in the parking lot between the train station and the hospital. When the duo arrives, Gordon and Alyx help Barney escort several groups of Citizens through significant Combine resistance into the escape trains. He is last seen leaving on a train saying, "See ya when I see ya!", as Gordon and Alyx decide to take the next one to give him and the Citizens time to escape.

Barney does not appear, nor is even referred to, during the course of Episode Two. Given his place as a returning character of note in the series, and that he escaped City 17 ahead of Freeman, he is presumed to still be alive, but his location is unknown.

However, when coming back into White Forest after the Strider battle, he can be heard saying "Good job, Gordon", but is not among the Rebels cheering in the garage. The subtitle appears with Barney's midnight green subtitle color, and uses the Episode One subtitle file, as it cannot be found in the Episode Two file. Marc Laidlaw stated that it was an accident.[8]

Lauren and Joe were relations of Barney's during the time of the Black Mesa Incident. As seen in the Half-Life: Blue Shift instruction manual, a "To do" list was handwritten by Barney in his "Operating Duties" file featuring information about the game's enemies, weapons, and equipment. It includes "1. Buy milk, 2. Pay water bill, 3. Call Joe, 4. Buy flowers for Lauren, 5. Change oil".[2] Two pictures of a man and a woman can be found in Barney's locker in Sector C; while they probably are initially relatives of Gearbox employees, they may have been intended to be Lauren and Joe.

Barney and Gordon have been friends since Black Mesa. Both would race into Dr. Kleiner's office via the air ducts when he would lock himself out. Barney would save Gordon from a miserable fate at Nova Prospekt, and send him on his way to Kleiner's Lab. The two would later fight side by side in the fierce street fighting in City 17, and escorting people out of the city. Barney also comments on Gordon's relationship with Alyx, calling Gordon a "lucky dog". He still owes Gordon a beer.

Alyx was just an infant at Black Mesa, and it is unknown if he met her during his tenure as a security guard. Nevertheless, he considers her a worthy ally in the human resistance on the Combine-occupied Earth.

Barney essentially serves as Kleiner's bodyguard, keeping the Civil Protection away from the area of the secret lab. Before this, as stated above, he would race Gordon to get to Isaac's office when the latter would lock himself out. 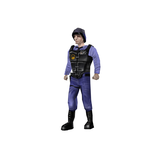 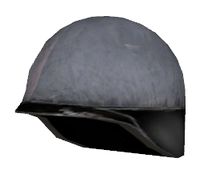 Combine OverWiki has a list of quotes for Barney Calhoun.
Retrieved from "https://combineoverwiki.net/index.php?title=Barney_Calhoun&oldid=464543"
Categories: