"It used to be a high security prison - it's something much worse than that now."
― Alyx Vance[src]

Nova Prospekt is a Combine detainment facility featured in Half-Life 2. It is played through two chapters set between the Coast and the City 17 uprising chapters, Nova Prospekt and Entanglement.

Prior to Combine occupation, it was a high-security penitentiary located not too far from City 17, however it was later acquired by Overwatch, and used as a facility to process and detain Citizens who were determined to be a threat - so called "anti-citizens". During Half-Life 2, it is used to contain Eli Vance, after he was captured by the Combine during a raid on Black Mesa East. Other people known to be detained include political prisoners, Resistance fighters, and troublesome citizens. The facility is used to process prisoners, and turn them into Stalkers or Combine Soldiers.

Nova Prospekt is separated into two parts as illustrated respectively in the two chapters of the game titled Nova Prospekt and Entanglement.

The old section of the building follows the motif of a communist gulag-styled maximum security prison, riddled with open confinement chambers (useless to the Combine), labeled cell blocks, offices, and large shower and maintenance facilities. The Combine, while they may have used the old prison prior to the introduction of the newer facilities, appear to have made little use of this particular area, as they progressively moved all Combine-related facilities and processes into the new section of the massive complex. This section exhibits many signs of disrepair and disuse, such as flooding forming in the sub-basements. Some of the less visited corners of the old section also contains vermin such as Barnacles, Headcrabs and Zombies, which further illustrates the fact that the Combine care little for the older section. These sections of Nova Prospekt are also slowly being absorbed into the new Nova Prospekt by means of Combine technology. It can be noted that large amounts of graffiti are located in these parts of the prison, indicating that humans had still been inside the facility after the Seven Hour War and its abandonment, and that the Combine did not take the prison over immediately after the end of the invasion. 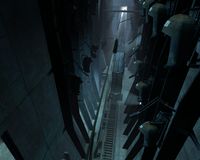 Razor Train and Combine cells in the Depot.

The new section of Nova Prospekt houses the processing facilities utilized by the Combine to convert prisoners into Stalkers, as well as the developmental technology for the Combine teleport.

The architecture of this section is an example of Combine land development technology, seen in the final scene of "Nova Prospekt", and in City 17 later in the game. This technology in its predeveloped stage is a massive wall of assorted bars, wires, and machinery arranged randomly. The random positioning of any particular part of the structure, working with every other part of the structure each with its own variable function, allows for millions of permutations of arrangements that, according to a specified program, will build into whatever Combine facility it has been told to become. This mode of automated construction allows for a Combine take-over of almost any area. This development is shown in the final scene of "Nova Prospekt" when the player happens upon an absolutely wrecked part of the old facility bordered on all sides by this wall of random machinery. As the player progresses through this odd valley of destruction, the walls begin to slowly change position eating up more of the old facility and becoming more specific in its arrangement. Shortly after this scene the player enters the Depot, the "new" Nova Prospekt. Upon close examination of the wall, it is discovered that the depot has been composed entirely out of the moving machinery seen earlier. Later in the game startlingly detailed examples of similar Combine architecture are seen in the Overwatch Nexus, and in the Citadel.

Nova Prospekt's prison areas are divided into 12 different cell blocks. All other cell blocks are seen as abandoned or in complete disrepair.

In Nova Prospekt, it becomes clear to the player that the Combine is not as invincible as once thought. Multiple visual clues suggest that the Combine, with all their technological superiority, were losing ground to the human "infection", even before Gordon arrived, such as:

Nova Prospekt is a turning point in the story. Up until this moment, the Combine forces seemed to be in full control over the situation. They were chasing Gordon, and he was constantly on the run. After the "Nova Prospekt" chapter of the game, this drastically changes, as Gordon stops running and engages them in their very base.

As Gordon progresses from the beach to Nova Prospekt proper, radio transmissions can be heard about Gordon wiping out hardpoints, and utilizing "biotics". 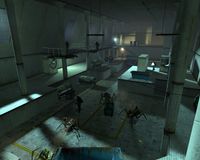 As mentioned above, the player visits along with a pack of Antlions. The Antlion swarm heading into the complex, goaded by Gordon Freeman and his sabotage of the beach defenses, seemed to trigger practically all the Antlions in the area surrounding the complex to help invade. This can be seen in-game by Combine having to fend off endless hordes of Antlions either flying through, or tunneling into the structure. Even a few of the extremely-tough Antlion Guards appear, smashing through thin walls with impunity and ramming any Combine they find, as well as Gordon himself. Although the Combine Overwatch attempted to defend the older section, they were overpowered by the numbers of Antlions as well as the occasional Antlion Guard and the efforts of Gordon Freeman. The older sections are assumed to be overrun and destroyed by hordes of Antlions as towards the end of the chapter, "Nova Prospekt", the player can hear the P.A. system ordering the soldiers to retreat from the older section.

Although background noises suggest that antlions are present in some areas, the Combine-occupied newer section remained untouched by the Antlions as witnessed in the chapter Entanglement. Thus, this portion of Nova Prospekt suffered minimal structural damage. This was until Gordon and Alyx used the main Combine teleport located deep within the newer section in an attempt to flee the facility with Eli Vance and Judith Mossman. While the teleportation was successful, the teleport became unstable during the process and exploded just after the teleportation was complete. It is assumed that the explosion destroyed most of the Depot. The destruction of Nova Prospekt was the event that signaled the beginning of the rebellion, and the one week long urban conflict in City 17, that resulted in the destruction of the Citadel's dark energy reactor.

While Nova Prospekt is not seen or mentioned in Episode One, during the second half of the chapter Exit 17, one can see a train platform labeled "Nova Prospekt" in a very similar way to the one seen in Half-Life 2's first chapter. However, the player can observe that the platform is largely sealed and littered with empty crates and other useless items which suggests that the Combine stopped using Nova Prospekt after the teleport exploded. 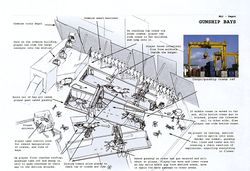 Concept art for the Gunship Bays.