"The walls and aisles were lined with video games, and almost every console was occupied. Suited citizens stood at the cabinets in a stance familiar to Gordon from every arcade he'd ever known. Tensed over a joystick, bodies twitching this way and that, one hand slapping a bright red button. From the speakers came whirring electronic sounds, shrill buzzsaw whines, and bright little shrieks cut off in mid-scream."
― Old Friends vignette[src]

The Manhack Arcade[3] is a Combine establishment in City 17 that was cut from Half-Life 2. Located at the end of a business and commercial district between the City 17 Trainstation and Kleiner's Lab, it was to be visited during the first chapters of the game.[1][4] There, Citizens were to be seen playing a video game centered around piloting Manhacks and tracking fleeing human targets for points, unaware of the fact that the Manhacks they were controlling were actually killing fugitive Citizens in real life.[3] 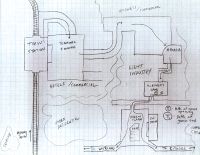 The Manhack Arcade featured in an early and longer route through City 17.

The premise of the arcade is briefly touched upon in Half-Life 2: Raising the Bar. As seen in the book's uncorrected proof, it was originally to be explained in greater detail through the reproduction of Marc Laidlaw's vignette Old Friends, one of several vignettes he had written to give to the development team for design inspiration.[2]

In this story, Gordon Freeman has left the train station and is walking down the rainy streets of City 17. At one point, he hears bright electronic noises and human laughter emanating from a door guarded by two Civil Protection officers. Ducking inside, he realizes he has entered an arcade. The interior is described as crowded, dark, cold, and filled with noise and flashing colored lights, unlike anything else he has witnessed in the city so far. The walls and aisles are lined with video games, and almost every console is occupied by gas mask-wearing Citizens. The arcade cabinets are described as being similar to their real world counterpart, players controlling the game with a joystick and a red button.

The video game, its title revealed to be Hackman as emblazoned as a shiny silver hologram, features primitive graphics and electronic sounds from the whines of saws and synthetic screams of the targets. The gameplay consists of steering a Manhack through a maze made of pipes and seeking targets, described as cartoony sprites of crude human figures with limited animation. Gordon observes what he believes to be a teen-aged Citizen player cutting a target in half, sending out tear-shaped drops of bright red blood as the adolescent laughs in delight. As the game ends, the screen flickers and scrolls up a menu saying "GOOD WORK! YOU'VE CLEARED THE SEWERS. ARE YOU READY TO LEVEL UP?". When the player presses the red button, they're prompted with the message "SELECT YOUR NEXT MANHACK!" along with a list of upgraded Manhack variations, being larger, faster, and sharper.

At this point, a Civil Protection officer interrupts, identifying Gordon by name and ordering him to head to the old radio tower to the north. Avoiding detection on his way, Gordon then follows the officer who is revealed to be Barney Calhoun into a substreet service tunnel leading to Kleiner's Lab. Upon arriving, Gordon is reunited with Kleiner and his old HEV Suit. The group then steals a bus, engaging in a chase with the Combine until eventually crashing into a ravine. Gordon manages to escape and ends up in the sewers. There, he recognizes the maze of pipes from Hackman and hears the sounds of approaching Manhacks, now realizing the true nature of the game.

About to hit a Citizen in flymh.

The player was intended to be able to play the video game. It utilizes the player_manhack entity that simply consists of the first person view of a Manhack with the words "...MANHACK ACTIVATED..." rendered on screen which pulsate between red and white. A flickering overlay also covers the screen. Upon entering Manhack mode, the engine switches to a larger model, manhack_sphere.mdl, to prevent the player's camera from seeing outside of walls through physics collisions. This process is also used for the likewise cut player_missile, the prototype first-person rocket feature. The model has no texture since it is not rendered in-game. In the original Half-Life 2 leak, the Manhack game is not functional, but one community-created partial restoration exists in the LeakNet patch.[1][5][6]

As seen in the WC map pack, while the game is not playable in any of the arcade machines featured in the various Manhack Arcade maps, two prototype maps are known to have been built for it: manhack_playground, from September 2001, in which the player can use a Manhack to kill Combine Soldiers in a Wasteland-like setting, and flymh ("Fly Manhack"), from January 2002 (a larger version of manhack_room, an unrelated January 2001 map used to test the Manhack NPC), in which the player is allowed to kill Citizens in an underground setting reminiscent of the game's description in Old Friends.[1]

The WC map pack features numerous Manhack Arcade maps, made from January 2001 to January 2002, based on the ideas provided by the vignette Old Friends. Since Hackman is not implemented in the arcade maps, the Citizens merely stand idle in front of the non-functioning machines. The arcade can be broken down into three main distinct iterations, themselves with some sub-variants.[1]

The earliest known version of the arcade building is featured in c17_05_05, from January 2001, and features an older version of the paperposter005b propaganda poster in which the Consul is featured. It is also featured in c17_04_12 to c17_04_31, made from February to October 2001, but it cannot be entered since it is supposed to be visited through the next map, c17_05. In February 2001, the area was partially reused for Captain Vance's headquarters in the map VanceHQ. At the end of the street is the Citadel's inner wall with Metrocops and APCs stationed at a large gate. In c17_05_06, from October 2001, the building facade was remade in displacements.

The interior of the building, which can be found in c17_05_05 and c17_05_06, classic arcade machines can be found. They are spread on two levels, with a lobby near the entrance, and Combine propaganda posters placed around. The player is meant to head upstairs where Barney Calhoun can be found. The player is then directed through a storage room to leave the building and head towards the radio tower located a few blocks away. The next map, c17_06, does not exist in the WC map pack.

The second version shows drastic changes: The building's facade and interior have been rebuilt from scratch, featuring more futuristic arcade machines. As seen in c17_04_32 made in October 2001, c17_04 has been expanded, and c17_05 is no longer used. The maps from arcade_01 to arcade_06 (December 2001 to January 2002) feature variations of the same main facade and interior.

In this version, the player is still expected to meet with Barney. This time, the exit route heads down escalators through a maintenance room where Barney awaits with the option of going through one large and one small arcade building, both connected by corridors, where Citizens are lining up to play. The maintenance room leads to the radio tower (directly, as in arcade_05 or through a small alley, as in arcade_06) that is connected to the sewers leading to Kleiner's Lab, covered in the map subt.

This third version features a similar interior than that of the previous one, only with a different facade and texture variations. It can be found in arcade_06a and arcade_06b, from January 2002.

Another version of the facade can be found in c17_04_41, from February 2002. In it, paperposter005b is brought back from the first versions to replace the star, and the building has been moved closer to the Consulcast than in the previous iterations of c17_04. More detail and a canal have been added to the surrounding area.

The facade appears to be inspired by that of the National Palace of Culture in Sofia, where Valve artist Viktor Antonov is from.

Although the development team considered that the concept sounded good on paper, it proved to be overly complex and not very fun. By the time it was cut, it was part of an early version of the exploratory route located between the City 17 Trainstation and Kleiner's Lab which proved to be much too long, making the exploratory phase tedious.[3][4] In the final game, it was replaced by the shorter route through the train station plaza and the tenement buildings.