"What are the odds two people survive this crash?"
― Combine Soldier[src]

The Skyscraper,[1][4] also known as Vert[1] / Vertigo[5] or Palace,[1] is the generic name of a City 17 location and chapter cut from Half-Life 2. Being the first location of the fourth day, it was to be set after the Weather Control chapter, and to be the first chapter of the street wars. According to the dates of the maps and the related sound files, it was worked on from around November 2000 to February 2002.[1][4]

After the Weather Control battle,[4] Gordon and Alyx were to go back to City 17 with a C-130 (later changed to a helicopter)[4][6] and head for the Citadel, but the aircraft was to be shot down and then crash at the top of a skyscraper building originally housing office spaces or exhibition. The crash was to cause Alyx to be injured and kidnapped by the Combine, and Gordon to have to find her father, Captain Vance, in an emergency bunker located near the Citadel's inner gates. Alyx sound files (two versions of the lines made by temporary actresses) found in the Half-Life 2 leak files and created late 2000 indicate that Alyx cannot move and tells Gordon to find an "emergency bunker near the inner gates" where her father is "in command".[1][7] It seems that Vance was to get back to City 17 by other means, since he is apparently already there and busy in his headquarters by the time of the crash.

Gordon was then to descend through the building from the top to the street level, finding his way around obstacles while encountering Combine forces deployed in the building (see below for a detailed list of enemies encountered). Then, after leaving the Skyscraper, he was to join the war on the streets by the rooftops of the surrounding buildings, to eventually reach ground level.[1][7]

Further sound files, created in November 2000, indicate that after Alyx's speech to Gordon and her being taken away, the player was to hear a Combine Soldier squad being deployed in the area via a helicopter to investigate the crash, talking through radios with normal human voices. Before flying away with captured Alyx, the squad leader was to order the remaining two Combine Soldiers to search the building's upper decks and work their way down to the lower floors. During their search they were to discuss Alyx talking to "someone below" before being taken away, her and Gordon crashing with "Rebel chopper" (instead of the earlier C-130), the possibility of finding Rebel weapons in the building (reportedly used as a cache by the Underground, and with an indirect reference to the Brickbat) or in the crashed chopper, and possibly keeping them to themselves despite the weapons being forbidden contraband. While talking, they were to be interrupted by a noise supposedly made by Gordon, then look for a way to reach the location of the noise and use explosives to blow up the rubble obstructing their path. Right after that, it seems they were to find themselves facing Gordon.[7] The environment for the sequence can be found in the chapter's first map, vert_01_001; however, no Combine Soldier NPCs or related entities are present, barring a few unscripted dialogue sounds and a damaged wall fully scripted to be blown up, the latter missing in the map's subsequent revisions.[1]

While the two Combine units are clearly identified as Combine Soldiers through their dialogue sounds named #sky_sol#, for "skyscraper" and "soldier", and several Combine Soldiers are present in the chapter's maps, in the conversation they suggest they use Stunsticks and one of them states their nervous system is unmodified, restricting them access to more complex Combine weapons, which would rather refer to Metrocops. 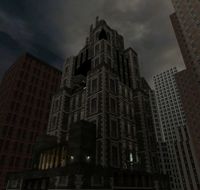 The first version is an Art Deco skyscraper reminiscent of the Empire State Building, City 17 having an American look at this time of the game's development. Inside the building can be found decrepit office spaces with brush furniture, hallways, stairwells and multiple elevator shafts, a mechanical floor, and a kitchen. A large atrium with a fountain is also located on the middle level of the building, to be reached by the means of descending on a window cleaning platform and breaking through the glass roof. The interiors follow an uniform Art Deco style, using mostly dark green and tan marble tiles as well as ornate wallpaper. Much of the building appears to be damaged or in heavy disrepair, with collapsed floors, burned interiors, crumbling plaster and broken steam pipes. As indicated by sound and precipitation entities, it is raining outside, with occasional thunder and lightning flashes over the C-130 crash site at the top of the skyscraper.

Enemies encountered by the player include Combine Soldiers, camouflaged Combine Elites, Headcrabs and Zombies, as well as a Barnacle found by a stairwell in the first map.

As it is common with material found in the Half-Life 2 leak files, some textures used in Vertigo and available in the playable leak had been replaced by other versions by the time the files were leaked. For instance, the exterior facade uses an older version of the texture set brickwall025 found in the leak files, whose patterns, alignment and scale do not match Vertigo's facade. This version of brickwall025 is made of dark green bricks, with stone-shaped molding at the corners and around the windows, but as seen in Vertigo's environment maps featuring its original textures, it appears brickwall025 was originally made of a brighter material interspersed with dark lines. The environment maps also provide a glimpse of an older version of one of the two skyboxes used by Vertigo, sky_c17_04, with a completely different color. The second skybox, sky_vert01, is missing from the files. Most of the original marble textures of the interior are still present in the leak files, but have been marked for deletion with pink crosses.

Vertigo is the most complete version of the two, having all of its maps prototyped and the next chapter starting at the foot of the building on the rooftops of the nearby smaller buildings. This latter part also contains Shuttles (flying APCs) flying above the battle, and Merkavas.[1]

The second version is a rather Stalinist building, a design more similar to the Eastern European City 17 seen in the final game. Its interiors consist mostly of exhibition rooms featuring pedestals with vases and Breen busts. Certain creatures and humanoids (including a Vortigaunt and Cohrt) were also to be seen on display in showcases, most probably serving as placeholders. Other exhibits were to include an Ichthyosaur hanged to the ceiling and the bronze horse statue from the final game (and the E3 2002 demo "Terminal") standing on a pedestal. Two citizens and Barney can be found near the elevator shafts at the end of the first map, though as these NPCs lack any scripting, it is therefore unknown if their presence has a storyline relevance.

In this version, the player was to encounter Combine Soldiers, a Headcrab, a Combine Assassin, a Mortar Synth, a City Scanner and a Shield Scanner. A Gunship was also to fly around the building, firing at the player.

Notably, unlike in the Vertigo version of the chapter, there appears to be no fitting environment for the two Combine Soldiers' dialogue and actions to take place, suggesting the original introductory sequence was dropped and the scene of Alyx's kidnapping was to play out in a different way.

This version of the chapter is much more incomplete, featuring only two maps, with the second one barely started on. Evidently, the development team aimed to remake the skyscraper from scratch for the new Eastern European setting they settled on, this time not featuring the battle on the rooftops below, but the chapter was dropped before any link to the streets was made; although what seems to be the first street war map, d4_streetwar_01, last edited September 2002, features the building at an incomplete stage outside the map's playable area. In the WC map pack, final names for the game's last part tend to start with d4_, while in the final version it stops at d3_, since the number of days covered by the game was reduced from four to three (disregarding the week spent between the two portals by Gordon and Alyx).[1] 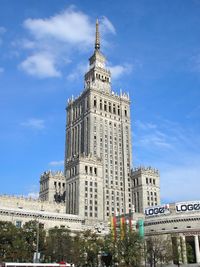 The Palace of Culture and Science in Warsaw.

Palace appears to be based on an actual skyscraper, the Palace of Culture and Science in Warsaw, although its adornments were heavily simplified and the clock removed. It currently serves as an exhibition center and office complex, much like the Half-Life 2 building originally did in the storyline.

The Palace of Culture and Science is a controversial Stalinist tower completed in 1955, the tallest building in Poland and one of the tallest in the European Union. The most famous Stalinist towers are the Seven Sisters buildings in Moscow; they include the headquarters of the former Soviet Ministry of Heavy Industry, the Lomonosov Moscow State University, the Hotel Ukraina or the Hotel Leningradskaya, among others.

The Consul statue might be inspired by that of Lenin that was to stand above the never completed supertall skyscraper Palace of Soviets in Moscow, another Stalinist tower.

Palace of Culture and Science[edit]