Headcrab Shells, also known as Headcrab canisters[1] or parasite rockets,[2] are a form of biological weaponry used by the Combine. These shells are launched over long distances and land in enemy-controlled territory, releasing a payload of Headcrabs. Used primarily to flush out and destroy Resistance bases, they are responsible for the destruction of many communities.

These large projectiles can crash through most barriers, embedding themselves several feet, even into concrete. At this point a hatch at the rear of the shell opens and reveals a metallic pipe-shaped container. There are several hoses that seem to spray the Headcrabs with some sort of gas or mist, possibly to enrage them or to speed up zombification. Up to a half-dozen Headcrabs climb from the end of this pipe and leap out into the crash site. Usually these are only basic Headcrabs although Fast Headcrabs have been observed exiting a shell. Poison Headcrabs also seem to be used in shells, but have only been seen emerging from unlaunched Headcrab Shells during Lost Coast and in the chapter Exit 17 of Half-Life 2: Episode One, in which only one Headcrab is included per shell. A possible instance in Half-Life 2 where the player can enter a house which has been bombed by a poison Headcrab Shell is during the Highway 17 mission. Searching the house will reveal several poison Headcrabs and a poison zombie, but no other types, indicating that the shell contained poison Headcrabs.

Once landed the Headcrabs go about their usual practice of attempting to kill or enslave any human they encounter. The Headcrabs will then simply infest the surrounding area, concealing themselves by burrowing into the nearby soil or taking up residence in pipes, vents, and other darkened hiding places. This infestation renders a significant area surrounding the crash site completely inhospitable to human life. While one shell is not a huge threat by itself, as Headcrabs are generally weak, the effects can be horrific when the Combine shell an area with scores of these munitions. This happened to the mining town of Ravenholm prior to the events of Half-Life 2 which was inhabited by a large number of escapees from City 17 and was quickly overwhelmed by the parasites, to the point where there is only one known human survivor, Father Grigori, left in the town. 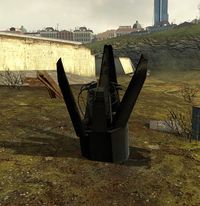 A Headcrab Shell in the Canals.

Throughout Half-Life 2, Headcrab Shells are fired from an unseen launcher somewhere in the player's vicinity, although fans speculate they may be fired from the Citadel. In Lost Coast, a working launcher is seen in St. Olga's monastery. The Headcrab Shells are fired with a loud explosion and streak towards their target in a steady arc, leaving temporary vapor trails behind and emitting a noise not unlike a conventional mortar shell.

The launcher itself has a large metal barrel with a plunger inside which fires Headcrab Shells roughly every 10 seconds. A sign on it indicates, "Warning, Moving parts can crush and cut. Keep hands and other objects clear during operation." It is easily destroyed by dropping metal objects like candlesticks into the chamber.

In the Half-Life 2 chapter Water Hazard, Headcrab Shells which don't deploy their payload are still shown to be very effective. One can be shown toppling a massive brick factory chimney, almost crushing Gordon in his airboat.

The Combine uses Headcrab Shells in much the same way as they use Manhacks, only on a wider scale, being an efficient way to eliminate entire centers of Resistance. In addition to being used on their own as an effective weapon, individual Headcrab Shells are also used in a tactical role during some operations where they are used to weaken smaller targets, create disarray, and force enemies out of entrenched positions.

Despite these horrific implications, this particular Combine technology does have one major weakness. Since the Headcrabs are effectively bottle-necked into the opening, they can be defeated easily before they are able to climb out of the shaft by simply standing near it and shooting or beating them to death as they jump out.

On one side, the Shell has an arrow with "DANGER" and "KEEP AWAY" written above and under it.