The City 17 Trainstation is the first location visited by Gordon Freeman in Half-Life 2. It is a passenger train station converted by the Combine as the primary hub of transit between City 17 and other cities or Nova Prospekt. It appears in the chapters Point Insertion, "A Red Letter Day" and Anticitizen One. 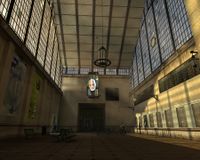 The food hall inside the trainstation.

Under the main glass roof, several platforms receive Citizens from other cities and locations coming in old, battered and reused trains. Upon arrival, Wallace Breen welcomes them in one of his Breencast speeches. Citizens are instructed by Metrocops to leave their luggage after getting off the train. City Scanners are flying around. After a turnstile follows a corridor leading to the waiting room where the schedules are displayed (which list other number cities, such as City 16, 15, 13, et al). After that follows a security checkpoint, with Metrocops guarding entrances. From there, three paths are possible: one leads to the Trainstation Plaza, the second leads to interrogation rooms where Gordon Freeman reunited with Barney Calhoun and Isaac Kleiner, and the third leads to the platform where Razor Trains leave to Nova Prospekt. The Plaza path leads to a corridor that then leads to the former ticket hall of the station, transformed into a food hall, where Citizens queue for their food packages at a ration dispenser. There, another Breencast discussing the concept of instinct is also broadcast. Another corridor leads to the Trainstation Plaza, where the same Breencast is broadcast on a screen attached to an obelisk, facing the trainstation main facade. Each road is blocked by Combine Barricade checkpoints, leading to different precincts and watched by cameras. A Combine Watchtower is also attached to one of the buildings. By the time of the City 17 uprising, the main trainstation entrance is sealed by Combine technology[5] and the whole area is heavily damaged, with Combine Smart Barriers having destroyed most of the surrounding buildings. At this point, a Breencast about collaborating with the Combine is broadcast.[6]

The WC map pack contains several maps showing the evolution of the trainstation facade and the plaza, most of them last edited in 2002, after which the trainstation was remade almost from scratch. The trainstation main entrance was never to be used since the player was to access the plaza from a tunnel coming from the Combine Factories area, the first City 17 area visited right after the trainstation. It is unknown what were the plans for the trainstation itself at this point of development, since the only known WC map pack maps of the trainstation's interior are from the same era that the ones used in the Half-Life 2 leak, which are almost identical to the final version; no maps of the early interior seen in the concept art by Viktor Antonov can be found in the WC map pack, only the maps it was derived from, i.e. the stenographer's chasm building in the adjacent Combine Factories area.[7][8][9] The old City 17 originally contained several plazas (the trainstation one, the Breen/Consul statue one, the Breen/Consulcast one, etc.) which were eventually merged into a single plaza. 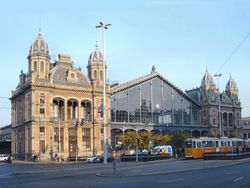