The nature of Dark Energy remained theoretical until the Combine occupation, as not even the scientists at the Black Mesa Research Facility had the technology to test the various hypotheses. It is now clear that there is a relationship between Dark Energy and zero point energy, and this explains why Gordon Freeman’s 'Gravity Gun' (Zero-Point Energy Field Manipulator) was not dissolved by Combine weapon confiscation devices and was instead infused with Dark Energy. As well as becoming more powerful, the field of the Gravity Gun also acquired some of the harmful effects associated with Dark Energy plasma.[source?]

Combine technology is therefore powered by the natural energy of space itself. Dark Energy reactors actually convert the energy into matter; Dark Energy's negative pressure means that the plasma that results from the conversion is a form of exotic matter. The exotic high-energy plasma is also sometimes referred to as Dark Energy for the sake of convenience.[source?] 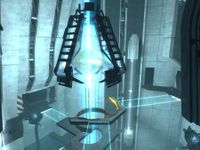 The core of a Citadel's Dark Energy reactor.
The Dark Energy supply as well as electricity for the Combine infrastructure is generated by a linked network of Citadel reactors. A Citadel’s reactor locally increases the intensity of space-time fluctuations, creating a sphere of volatile space-time in the reactor core that has a high concentration of Dark Energy. An anti-mass condenser field converts the Dark Energy into particles of exotic matter, which are emitted from the poles of the sphere as beams of plasma. Although the initial start-up process requires an immense amount of power, the exotic properties of the Dark Energy plasma further amplify the quantum fluctuations and cause a chain reaction within the core that makes the reactor self-sustaining and capable of producing near-astronomical amounts of power.[source?] 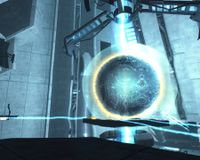 The unstable core of the Citadel reactor when the containment systems are off-line.

When the dark fusion reactor of City 17's Citadel exploded, the blast subsequently destabilized the main Citadel reactor, and also forced a damper on the entire network of linked Citadel reactors. This chain of events disabled all Combine teleportation and inter-dimensional communication systems on Earth. Combine forces that remained within the damaged Citadel disabled the main reactor's containment system to accelerate the unstable reaction. This allowed them to release a vast amount of Dark Energy into the space-time anomaly above the Citadel and convert it into a portal[source?] through which a signal could be transmitted to other Combine forces at the cost of causing a Dark Energy flare to annihilate the Citadel and City 17. 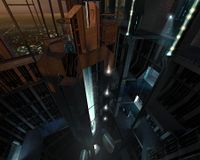 The dark fusion reactor at the summit of City 17's Citadel.

A dark fusion reactor fuses exotic particles of Dark Energy plasma together, releasing large amounts of displacement energy.[source?] The dark fusion reactor at the pinnacle of the City 17 Citadel was used to power a tunneling entanglement teleportation system.[1] This technology allows the Combine to tunnel through into other universes, and provides both the transportation and communication links between the occupation on Earth and the rest of the Combine forces. Unlike the teleportation systems developed by humanity, portals generated by dark fusion power cannot be used to teleport from one location to another on Earth without modification.

When Gordon Freeman destabilized the teleport of the Citadel the dark fusion reactor suffered a catastrophic failure and exploded. The detonation obliterated the top half of the Citadel and destabilized the main Citadel reactor, while the huge blast of displacement energy formed an anomaly in space-time[source?] that caused the cloud layer surrounding the Citadel to become a violent, glowing vortex.

Dark Energy is transferred in the form of glowing beams of plasma, or concentrated into Energy Balls,[source?] their exotic properties distorting light. Also, beams of Dark Energy in the Citadel form cylindrical fields in which gravity is neutralized. Dark Energy plasma can be stored in a Dark Energy core, which acts as a sort of battery and can be plugged into a generator.[source?]

This type of generator contains the energy ball within a force field where it oscillates up and down, and its moving space-time distortion drives an electrical generator. The oscillating energy ball evaporates very slowly and therefore one energy ball can drive a generator for many hours. The generator powers its own containment field on activation; this field is sufficient to keep the energy ball from degrading as it would in normal space, but zero-point energy, e.g. a shot from the gravity gun, will remove the energy ball and deactivate the generator. Given their (relative) stability, it can be assumed that a variation of the oscillation reactor powers most Combine vehicles, especially given the extended periods of time for which they are able to operate and their ready access to Dark Energy; the instability of exotic matter released from a destroyed generator would also account for the violence with which critically damaged Combine vehicles explode.[source?]

Socket generators use energy balls directly as fuel, allowing the exotic matter contained therein to revert to Dark Energy. This produces far more power, but it also causes the energy ball to dissipate far more quickly than an oscillation generator. Socket generators are more commonly used in areas where Dark Energy is more readily available, such as in the areas of the Citadel directly surrounding the main reactor. The parts of this generator are a sliding circular ring and four outward pointing pincers, which retract inward when it detects a Dark Energy orb.[source?] This resembles the "Aperture Science High Energy Pellet Socket", though that version only has three pincers which fold together like an accordion on the edge rather than into itself.

The exotic particles neutralize a target's mass, causing the victim to drift into the air before total annihilation.
Dark Energy plasma can have very disruptive effects if it comes into contact with normal matter. This property is used in Combine weapons technology, such as the Overwatch Standard Issue Pulse Rifle, and the gun turrets on gunships and Striders. Pulse-rifle ammo clips contain capsules of Dark Energy plasma; the bullet-like discharges of exotic matter cause tiny spatial distortions and anomalies that damage the structure of a target.[source?] 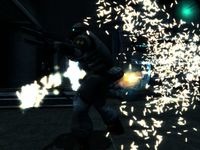 A group of Overwatch forces are dissolved by a discharge of Dark Energy.

The pulse-rifle also has an alternate fire mode which uses Dark Energy cores to fire a head-sized Dark Energy ball. When such a concentrated blast of exotic matter passes through a human-sized life form, the target is instantly killed. Furthermore, the victim’s mass is cancelled out by the negative energy,[source?] causing the corpse to start floating in defiance of gravity a moment before it dissolves as a result of molecular disintegration. The Dark Energy blast fired by the mortar-like “suppressor” weapon has a similar deadly effect, while Striders are armed with Dark Energy cannons so powerful that they warp space and cause pronounced visual distortions.