From Combine OverWiki, the original Half-Life wiki and Portal wiki
(Redirected from Half life)
Jump to: navigation, search

Half-Life is a science fiction first-person shooter played from the perspective of scientist Gordon Freeman. Designed for Microsoft Windows by Valve Software, the game uses a heavily modified version of the Quake engine, called GoldSrc.[6][7]

In Half-Life, players assume the role of the protagonist, Dr. Gordon Freeman, a recent MIT graduate in theoretical physics, and also a recent employee at Black Mesa. After an experiment that goes horribly awry when an unexpected Resonance Cascade (an apparently completely fictitious occurrence) rips dimensional seams that devastate the facility, Gordon must fight to escape the now alien-infested facility as creatures from another world — known as Xen — subsequently enter through these dimensional seams.

Half-Life's plot was originally inspired by the computer games Doom and Quake (both produced by id Software), Stephen King's novella The Mist, and an episode of The Outer Limits called "The Borderland". Valve’s in-house writer and author, Marc Laidlaw, who wrote the books Dad's Nuke and The 37th Mandala, later developed and expanded the plot. However, the most distinctive aspect of the game is not the plot itself, but rather the way it is presented to the player.

The game tells the story by flowing into scripted sequences that are integrated as part of the game rather than as cutscene intermissions. These sequences range from the introduction of major plot points such as the Resonance Cascade to bringing the player into a particularly difficult part of a level. Two of the intended results of this style of presentation were to increase immersion and to maintain a contiguous narrative that keeps the player's interest throughout. This differed from games at the time, making Half-Life distinct, as well as defining conventions that would last for years to come.

Valve implemented other factors to heighten the feeling of immersion, such as preventing the player from seeing or hearing their own character, who remains a silent protagonist throughout the game, and ensuring that the player rarely loses the ability to control Gordon, even during monologues. This constant experience of the game allowed players to totally fulfill and customize, almost, the role of Gordon, whilst letting them know who they were playing as. The scripted sequences maintain flow by keeping the player immersed in the game, whereas cutscenes in other contemporary games had often been a diversion from previous segments of gameplay. The levels for Half-Life were also divided into small sections to minimize long interruptions from loading. 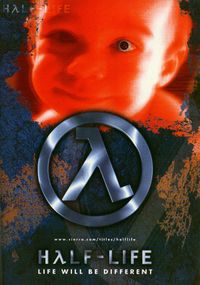 Early promotional poster, with a Lambda logo in a baby's eye.

Half-Life was the first product for Kirkland, Washington-based developer Valve Software, which was founded in 1996 by former Microsoft employees Mike Harrington and Gabe Newell. They settled on a concept for a horror-themed 3D action game, and licensed the Quake engine from id Software. Valve eventually modified the engine a great deal, notably adding skeletal animation and Direct3D support; a developer later stated that seventy percent of the engine code was rewritten.[8] At first, Valve had difficulties finding a publisher, many believing their project "too ambitious" for a studio headed by newcomers to the video game industry. However, Sierra On-Line had been very interested in making a 3D action game, especially one based on the Quake engine, and so signed them for a one-game deal.

The original code name for Half-Life was Quiver, after the Arrowhead military base from Stephen King's novella The Mist, which served as early inspiration for the game. Other names considered for the game included Triphammer and Belly of the Beast.[9] Gabe Newell explained in an interview that the name Half-Life was chosen because it was evocative of the theme, not clichéd, and had a corresponding visual symbol: the Greek letter lambda, which represents the decay constant in the half-life equation.

The first public appearances of Half-Life came in early 1997; it was a hit at the Electronic Entertainment Expo that year, where they primarily demonstrated the animation system and artificial intelligence. Valve Software hired science fiction author Marc Laidlaw in August 1997 to work on the game's characters, story, and level design. Half-Life was originally planned to be shipped in November 1997,[10] to compete with Quake II, but was postponed when Valve decided the game needed significant revision.

In a 2001 "Making of..." (Issue 105) feature in Edge, Newell discussed the team's early difficulties with level design. In desperation, a single level was assembled including every weapon, enemy, scripted event and level design quirk that the designers had come up with so far. This single level inspired the studio to press on with the game. As a result, the studio completely reworked the game's artificial intelligence and levels in the year leading up to its release. At E3 1998 it was given Game Critics Awards for "Best PC Game" and "Best Action Game" at the expo. The release date was delayed several times in 1998 before the game was finally released in November of that year. 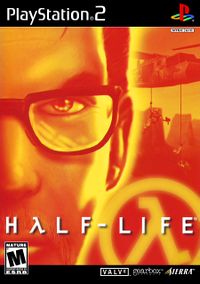 The game had its first major public appearance at the 1997 Electronic Entertainment Expo, where it was widely acclaimed.

On its release, critics hailed its overall presentation and numerous scripted sequences, and it won over 50 PC Game of the Year awards.[11][12] Its gameplay influenced first-person shooters for years to come, and it has since been regarded as one of the greatest games of all time.[13] As of December 2008, Half-Life has sold 9.3 million copies.[14] As of July 14, 2006, the Half-Life franchise has sold over 20 million units.[15] According to GameSpy, Half-Life was the most played online PC game (excluding MMORPGs) as of September 2008, ahead of Half-Life 2.[16] In celebration of the game's 10th anniversary, Valve lowered the price of Half-Life from $9.99 USD to $0.98 on November 19, 2008 for three days.[17]

The game was shipped with a free-for-all type of deathmatch. This was seen again in Opposing Force with the Capture-the-Flag mode. It was received very well by fans and has spawned countless mods and maps. It is much more fast paced than the campaign. It still has a large amount of players today.

After its initial release for Windows systems, several Half-Life ports were developed for additional platforms, including the Playstation 2, Macintosh and Dreamcast. Only the Playstation 2 port would be released, with the rest being cancelled due to profitability concerns.

Two expansion packs made by the developer Gearbox Software have been released for the PC version: Half-Life: Opposing Force (1999) and Half-Life: Blue Shift (2001). Opposing Force returns the player to Black Mesa during the events of Half-Life’s storyline, but this time from the perspective of the U.S. Marines sent to cover up the incident. It introduced several new weapons, new characters, both friendly and hostile (Otis Laurey the security guard and the Race X aliens, respectively) and new, previously unseen areas of the facility. The expansion is much shorter than Half-Life, having eleven chapters to the original's nineteen.

Blue Shift returns the player to Half-Life's storyline once more, this time as one of the facility's security guards. Originally developed as a bonus mission for the canceled Dreamcast version, Blue Shift came with an optional High Definition Pack that could update the look of Half-Life, Opposing Force, and the new Blue Shift content. In particular, the models' polygon count and texture resolutions were increased, and some changes were made to the in-game sounds, most notably the Shotgun. Blue Shift had relatively little new content compared to Opposing Force: aside from a few models (jacket-less scientists and security guards, Otis, and Dr. Rosenberg), all content was already present in the original Half-Life.

Decay was another expansion by Gearbox, released only as an extra with the PlayStation 2 version of Half-Life. The add-on featured co-operative gameplay in which two players could solve puzzles and fight alongside against the many foes in Black Mesa.

The sequel Half-Life 2 was merely a rumor until it was finally revealed at E3 in May 2003, which ignited a firestorm of hype surrounding the game. The player again takes the role of Gordon Freeman, this time several years after the Black Mesa incident in the dystopian City 17, where he must fight as part of a rebellion against an oppressive alien regime. After a series of controversies and delays, Half-Life 2 was released on November 16, 2004.

After its release, Half-Life saw fervent support from independent game developers, due in no small part to support and encouragement from Valve Software. Worldcraft, the level-design tool used during the game's development, was included with the game software. Printed materials accompanying the game indicated Worldcraft's eventual release as a retail product, but these plans never materialized. Valve also released a software development kit, enabling developers to modify the game and create mods. Both tools were significantly updated with the release of the version 1.1.0.0 patch. Many supporting tools (including texture editors, model editors, and rival level editors like the multiple engine editor QuArK) were either created or updated to work with Half-Life.

Half-Life's code has been released and is being used as a base for many multiplayer mods such as the immensely popular Counter-Strike. Other popular multiplayer mods include Team Fortress Classic, Day of Defeat, Deathmatch Classic, Action Half-Life, Firearms, and Natural Selection. Team Fortress Classic and Deathmatch Classic were both developed in-house at Valve Software. Some mods, such as Counter-Strike and Day of Defeat, that began life as the work of independent developers (self-termed "modders"), later on received aid from Valve. There was even a free team-based multiplayer mod called Underworld Bloodline created to promote the Sony Pictures film Underworld.

Numerous single-player mods have also been created, such as USS Darkstar (1999, a futuristic action-adventure on board a zoological research spaceship), The Xeno Project 1 and 2 (1999-2005, a two-part mod starting in Xen and again including spaceships), Edge of Darkness (2000, which features some unused Half-Life models), Half-Life: Redemption (1999, which brings back Gordon Freeman for four additional episodes and another encounter with the G-Man), They Hunger (2000-2001, a survival horror total conversion trilogy involving zombies), Poke 646 (2002, a follow-up to the original Half-Life story with improved graphics), Point of View, the player controls a Vortigaunt, and Half Life: Zombie Edition, where the player plays as a Headcrab).

Some Half-Life modifications eventually landed on retail shelves. Counter-Strike was the most successful, unexpectedly becoming the biggest selling online game to date and having been released in five different editions: as a standalone product (2000), as part of the Platinum Collection (2000), Counter-Strike: Condition Zero (2004), Counter-Strike: Source (2004), which runs on Half-Life 2's Source engine, and Counter-Strike: Global Offensive (2012), the newest addition to the series. Team Fortress Classic has had a visual upgrade to the Source engine, becoming the stylized Team Fortress 2. Day of Defeat also received the Source treatment, becoming Day of Defeat: Source. Gunman Chronicles (2000), (a futuristic Western movie-style total conversion with emphasis on its single-player mode) was also released as a stand-alone product.

Half-Life's soundtrack consists of specially composed tracks by Kelly Bailey, who also composed much of the music for the rest of the series. He was also responsible for the game's sound design.

Early in the game's development, the humorous idea of a food fight was proposed to occur in a cafeteria, idea eventually rejected.[18]