"You mean it's working? For real, this time? Because I still have nightmares about that cat."
― Barney Calhoun[src]

Teleportation,[3] portals,[4] displacements,[5] or quantum space holes,[6] are a means of transferring matter between two locations or dimensions, regardless of their proximity. It is the central and most pivotal theme of the Half-Life and Portal universe.

Teleportation is achieved by use of devices able to create a portal, which connects together two gateways of departure and arrival, allowing an object entering one gateway to leave via the other. It is achieved instantaneously.

The portal appearances and generations may vary depending on the technology used: 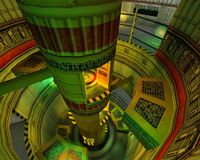 Teleportation was a major field of study at Black Mesa, and their portals were used primarily in the procurement of Xen crystals, as they were used to transport scientists to and from the Borderworld for research and analysis via the Dimensional Portal Device located in the Lambda Reactor Complex. The portals can be used to travel between Xen and Earth; however, portals that allow for travel within the same dimension can be found across the facility, notably in the Lambda Reactor Core, which contains nine portals, three on each of its three levels. Both Gordon Freeman and Barney Calhoun traveled to Xen through such a teleport, and to escape from the Black Mesa facility before its destruction. The Displacer Cannon, found and used by Adrian Shephard, can also allow for dimensional travels.

During his brief visit to Xen, Barney is also required to activate and calibrate a "focal point", which was then used by Doctor Rosenberg to teleport several members of the science team outside of Black Mesa.

Orange and blue portals created by Chell with the ASHPD.

Research into the portal technology by Aperture Science focused upon travel within the same dimension. Portal technology was discovered with far more ease, and far earlier, than at Black Mesa, with the technology appearing as early as the 1950s in the form of the Aperture Science Handheld Quantum Tunnelling Device, which was eventually streamlined into the far more portable Aperture Science Handheld Portal Device. The ASHPD, or "Portal Gun", was used as a quick method of travel over potentially unlimited distances. Through the use of the Portal Gun, Chell, one of Aperture's Test Subjects, could make objects appear to exist in two locations simultaneously.

These portals follow a more simplified portal style, where light is able to enter the portal and send an image of both sides. They also allow for a more instantaneous transit between the portals, as it is simply a matter of walking in and appearing out of the other one. The ability to place them on any flat surface with holes or a Moon rock surface to attach a portal to makes these much more versatile and efficient than their Black Mesa counterparts. A surface fit to receive a portal is said to be "portalable".

Alyx Vance about to be sent to Black Mesa East through Kleiner's Lab teleport.

During the Combine occupation of Earth, the Resistance was able to develop new advancements in portal technology that allowed for single-dimensional travel. The Combine, developing alongside the Resistance, were able to make developments, however were still unable to discover the means of single-dimension teleportation (due to their inability to factor in the Dark Energy equations), and were forced to use much slower and conventional means of transportation if they wanted to stay within a single dimension.

The teleport in Kleiner's Lab was perfected upon Gordon's arrival in City 17, and it was inaugurated by Alyx Vance, who had a successful transit to Black Mesa East. However, being fragile, the teleport was damaged by Lamarr during Gordon's attempt, and he was, instead, teleported right outside of the lab and forced to join Black Mesa East on foot after being spotted by the Combine.

The Resistance's discovery was major, as it put them one stride ahead of the Combine in the fight for Earth. It must be noted however, that human-made portals are able to accomplish this feat by using the dimensional borderworld Xen as a relay; in the words of Judith Mossman, "we figured out how to use Xen as an unexpressed axis, effectively a dimensional slingshot so we can swing around the borderworld and come back to local space without having to pass through". This method of using an "Unexpressed Axis" centered on Xen removes the need to travel through it or to use a focusing device (like the one activated by Barney Calhoun), but instead use a modulator to emulate its effects.

Additionally, teleports are used to supply Freeman with Magnusson Devices during the Combine raid on White Forest. These teleports are smaller and portable, allowing them to be placed in the surrounding wilderness and regularly replenished with the devices.

The Combine also housed their own teleport in the Depot, where it is seemingly used for transporting prisoners. When Alyx and Gordon visit Nova Prospekt to rescue Eli Vance, they are required to use this teleport to return to Kleiner's Lab. This plan is waylaid, however, as Judith Mossman uses it to transport Eli to the Citadel. When the teleport is finally recharged, Alyx and Gordon end up in City 17 a week later.

Using a different technology than that of the Resistance teleports, the Combine were able to covertly work on same-dimensional travel, however the device was not able to teleport large masses, and required a long time to recharge. As oppose to the "slingshot" method, they used "string-based" technology.

As its name suggests, this is a considerably larger portal, capable of transporting much larger volumes of matter over greater distances. It is also able to generate Portal Storms, used only to destruct the Superportal's greater surroundings.

When Alyx and Gordon escape from City 17 during the Portal Storms, they see in the distance the remains of the Citadel, and the infant Superportal, which was said if it were to open, would allow Combine units to sweep in and recapture Earth. However, Superportals take a while to gain strength and eventually open.

Xen creatures are also able to use portals to travel between worlds; after the Resonance Cascade, they can be seen teleporting in and out of the Black Mesa Research Facility. Their ability to do so made their siege on Black Mesa all the more easy, as they were able to teleport into almost all areas of the facility. During the events of Half-Life 2, they cannot be seen using portals to travel to Earth.

Xen also features several small monolithic teleports and portals, as well as a larger teleport leading to Nihilanth's lair. These teleports have three prongs, and (besides the one leading to Nihilanth's chamber, which holds a rift similar to the one that the Anti-Mass Spectrometer created) generates a beam of energy, again similar to the Spectrometer, onto what seems to be a small Xen Crystal shard.

Along side the Xen creatures' technology, Nihilanth can also naturally generate portals, most likely able to be formed by the Xen Crystal in his head.

After Gordon is trapped in stasis by the G-Man, just before the destruction of the Citadel's core, he is rescued by numerous Vortigaunts, who teleport him away from the G-Man's hold and Alyx from the top of the Citadel, to the base. Vortigaunts seem to be able to teleport only when in contact with the Antlion's extract, assumed by the purple hued glow they gain from it. 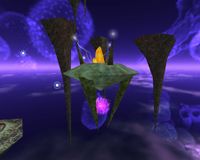 Sprites flying from a Race X purple portal on Xen

Race X creatures seemed to have mastered teleportation technology, even with single units teleporting at will. Sprites also seem to power Race X portals, and seen powering the Gene Worm's portal to Earth. The difference is that their portals are purple rather than green.

As the player draws closer to the Citadel in Half-Life 2, there is a progression from purely human forms to overwhelmingly alien environments. This is reflected in the crucial teleport technology shown throughout the game, from Dr. Kleiner's and Eli's crude, jury-rigged teleports, to the polished Nova Prospekt teleport, and finally to the immense portal at the heart of the Citadel. Designing these devices so they shared similarities, yet were visually distinct as a reflection of their creators, is said to have been a challenge for the artists.[1]

Half-Life and its Expansions[edit]